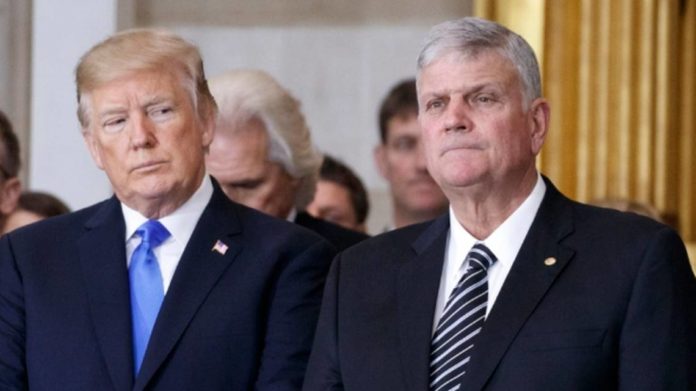 Evangelist Franklin Graham has already called for a national day of prayer this Sunday, June 2, to protect President Donald Trump from his “enemies,” and now he’s suggesting that should House Democrats open an impeachment inquiry, it will trigger a second civil war in the United States.

In an interview with The Christian Post, Graham remarked:

“If the president was brought down for whatever reason, it could lead to a civil war. There are millions of people out there that voted for President Trump that are behind him that are angry and they are mad. We are just living in a very dangerous territory, and we need God’s help.”

There are also three million MORE people who didn’t vote for Donald Trump in 2016. Does that mean they should start a civil war? Using Graham’s deeply flawed “logic,” that would seem to be what to expect, and yet no civil war is taking place. Maybe that’s because liberals and progressives actually believe in the rule of law, unlike the current resident of the White House, who seems to believe he is above all of the laws that apply to the rest of us.

Graham also tried to explain why he was predicting such a dire scenario for the country:

“So he is the president of the United States. You had two years of investigation that came up with nothing. Now the media and his opponents in Washington are doing everything they can to destroy him. What we need to remember is that he is the president. That doesn’t mean that he is a perfect person. He is flawed like all of us. He has made plenty of mistakes but he is the leader of this nation. We have got huge problems in front of us.”

The investigation came up with nothing? Did Graham not manage to see what Special Counsel Robert Mueller said earlier this week? He quite specifically explained his investigation found that Trump had obstructed justice and would have been indicted were it not for a DOJ memo that prohibits indicting a sitting president.

But perhaps the most absurd thing that came out of the mouth of this so-called “Christian” would be the assertion that Trump has been attacked more than any president in history:

“I think what is going on in Washington has something to do with [my call to prayer]. It has bothered me and it has been a burden on my heart because this president is being attacked more than any president in modern history; attacked by the press more than Abraham Lincoln.”

Abraham Lincoln was assassinated for daring to keep the republic from permanently splitting apart, but Trump deserves our sympathy? Please!

Some one needs to tell Franklin Graham that his prophecies of violence are nothing but hot air. And he also needs to be down on his knees praying God will forgive him for supporting the most immoral man to ever be elected president.