The United States Blues
Home National News Franklin Graham says it would be ‘a nightmare’ if LGBT Americans are... 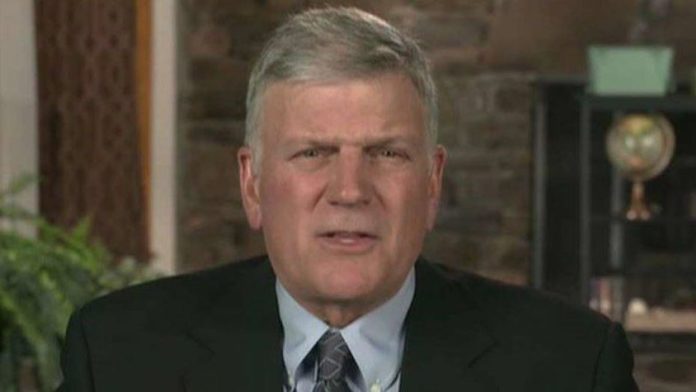 Evangelist Franklin Graham says that if legislation granting full civil rights LGBT Americans passes in Congress, the United States will never fully recover and that such a scenario would be “a nightmare.”

Weighing in on the Equality Act, which would merely extend the Civil Rights Act of 1964 to include protections for LGBT citizens in the areas of housing, credit, education, and public accommodations, Graham went on an extended diatribe in Decision magazine, which calls itself “the evangelical voice for today,” writing:

The progressive, Democratic-controlled House of Representatives has already passed this atrocious bill, and only the Republican-controlled Senate and the president stand in its way. If the Senate majority changes or if enough Republican senators change their position, it would be up to the president to veto the bill. And if that office were to change hands in 2020, I have little doubt this would become the law of the land.

This legislation will have catastrophic consequences for competitive sports, along with churches and faith-based nonprofits who would lose all protections to hire people who adhere to their Biblical statements of faith. Christians will be persecuted for their sincerely held beliefs as never before. The clear teachings of the Bible on the sins of homosexuality and abortion will no doubt be considered “hate speech.” It will be a nightmare from which this nation may never recover.

No one wants to punish anyone for their religious beliefs. That’s a blatant lie.

Also, Graham knows the GOP-controlled Senate will never pass the Equality Act, and even if they did, President Donald Trump would never sign it because he’s counting on evangelicals to vote for him again in 2020.

The real purpose of Graham’s absurd editorial in his so-called “Christian” publication is to frighten people and stir up hatred of “the other.” That’s the same sort of thing Trump has done since he first announced his candidacy and called Mexican immigrants “rapists.”

Graham and his ilk are all-in for Trump, even though he’s the most immoral man to ever be elected president, a man who likes to brag about sexually assaulting women and hang out with alleged pedophiles like Jeffrey Epstein.

Perhaps Franklin Graham needs to go back and read the Declaration of Independence, provided he ever read and fully understood it in the first place. In it, he’ll find this:

“We hold these truths to be self-evident, that all men are created equal, that they are endowed by their Creator with certain unalienable Rights, that among these are Life, Liberty and the pursuit of Happiness.”

Life, liberty, and the pursuit of happiness. That includes being free from the tyranny of religious bigots like Mr. Graham.