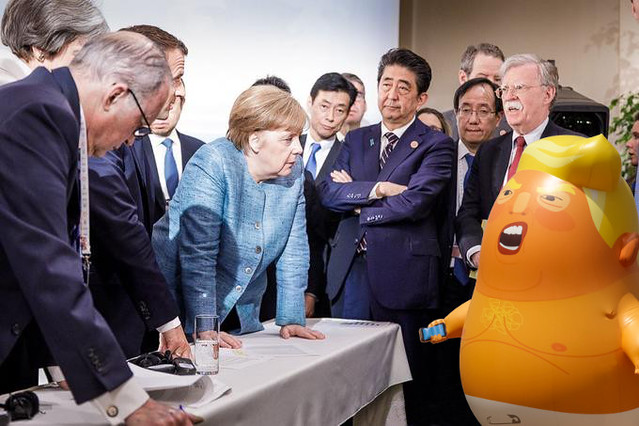 As President Donald Trump heads to Europe to attend the G7 conference in France over the weekend, diplomats are already expressing dread that they will have to manage a petty toddler to prevent the summit from being a total disaster.

In years past, summits like the G7 have been approached with anticipation as leaders from around the world get a chance to work with each other to achieve common goals. But ever since Trump took office, the event has become more of a chore.

For instance, Trump used the 2018 G7 summit in Canada to demand the reinstatement of Russia to the group even though Russia had been expelled in retaliation against Vladimir Putin’s invasion of the Crimea in Ukraine.

Trump is also hoping to use a future G7 summit for his own financial gain by demanding it is held at one of his struggling golf courses.

It also doesn’t help that Trump is uncooperative and lashes out when he doesn’t get his way. Keep in mind, these leaders are some of our greatest allies, yet Trump is treating them like an enemy.

It’s these kinds of tantrums and bullying that is causing trepidation this year among diplomats.

Like an annual holiday gathering where the main goal is to get through the day without a family explosion, one of France’s main objectives as host of this weekend’s Group of Seven summit is to minimize the chances that President Trump will blow it up.

First of all, Trump’s recent attacks on Denmark for refusing to sell Greenland isn’t helping to instill confidence among diplomats that Trump will not lash out during the trip.

“When countries like Denmark are in the firing line, you just try to get through the summit without any damage,” one diplomat said.

“Every one of these, you just hope that it ends without any problem,” said another. “It just gets harder and harder.”

In fact, diplomats are already preparing for Trump’s bad behavior.

“You have to plan going into the summit that he is going to try to divide and conquer,” a diplomat noted.

But Trump is already causing chaos at the G7 by demanding a last-minute meeting so he can rant about the economy and brag about his imaginary economic success despite global recession fears caused by his trade wars.

Already, Trump has shaken up the schedule, calling at the last minute for a special meeting Sunday morning to discuss the global economy. Senior administration officials said he will contrast U.S. growth with Europe’s economic doldrums and press his pro-jobs and ‘fair’ trade messages. It is unclear how receptive the others will be to whatever thoughts Trump might offer as to how they should shift their own economic approaches. Many world leaders blame Trump’s trade war with China and his threats against Europe and Japan for a major contraction in investment and spending, and are frustrated with what they see as attempts to use weaknesses elsewhere to demand changes he thinks will benefit U.S. companies.

Likely, Trump will try to pin the blame on Democrats or other nations for the coming recession under his watch.

But regardless of what he whines about, Trump’s behavior at the G7 is almost guaranteed to be embarrassing and will be just another reason why the United States is a laughingstock on the international stage.

World leaders and diplomats should not dread having to interact with the American president, but that’s the reality we now live in because of Trump. And unfortunately, there is no adult daycare in existence that is capable of dealing with the toddler who occupies the White House right now.