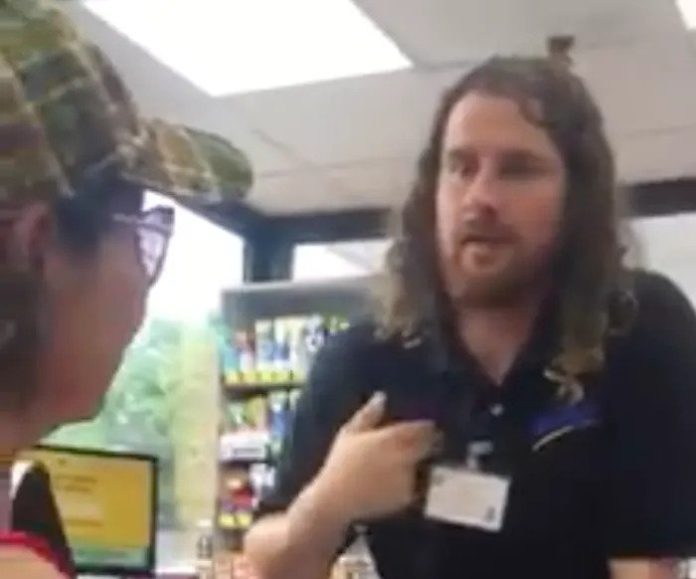 Perhaps inspired by the disgusting, racist language President Donald Trump used when talking about four female Democratic members of Congress, a clerk at a gas station in Illinois decided he’d hurl a few insults at some Latina customers.

In the video posted on Facebook, a clerk standing behind the payment counter is heard apparently complaining to two women about what he suspected were undocumented people.

The conversation between the clerk and the women went like this:

Customer: “And? What is your problem?”

Clerk: “It’s illegal. Are you a citizen?”

Clerk: “Don’t you know the rules? They need to go back to their country. It’s illegal.”

Customer: “You be quiet.”

Clerk (as the women are walking away): “Bye. God bless you. You have the wrong country.”

Unlike Donald Trump, however, there were some very real consequences for the clerk who told the women they weren’t welcome.

On Thursday, Bucky’s Convenience Stores confirmed that the employee was no longer working with the company, calling his behavior “inappropriate.”

“He is no longer employed by us,” the company said in the statement. “We do not tolerate any behavior that is insensitive to our valued customers. Bucky’s Convenience Stores is a very diverse and inclusive company that believes in treating all individuals with the utmost respect.”

The video was shot by Carolina Buitron, who told NBC Chicago that she was speaking Spanish with some family members who were visiting from Mexico. When the clerk heard them using Spanish, he told them to leave because they were “illegals.” She added:

“He started asking about my cousins, if they were illegal, family or friends, are they adopted.”

So far, the video has been viewed over 635,000 times since it was posted on Tuesday, which came just two days after Trump insisted that members of “the Squad” leave the United States if they didn’t like his policies.

As for the clerk, he too has been identified, and he happens to be a Trump supporter:

The clerk in the video was identified as Joseph Phillip Daniel, a Trump supporter who describes himself on social media as a “prophet,” and has repeatedly posted videos of himself reciting prayers in the middle of natural landscapes.

Daniel has also referred to Democrat politicians, including former vice president Joe Biden, Rep. Nancy Pelosi and Rep. Alexandria Ocasio-Cortez as satanists. In social media posts, he claimed Democrats would be taken down by the “Trump curse” if they attacked the president.

In one video, Daniel stood in front of the Washington offices of Ocasio-Cortez and said, “All the demons in this office are powerless against you, Father God, and your appointed leader, Donald J. Trump.”

But neither the “appointed leader” or God himself will be able to get “Prophet” Daniel his job back.