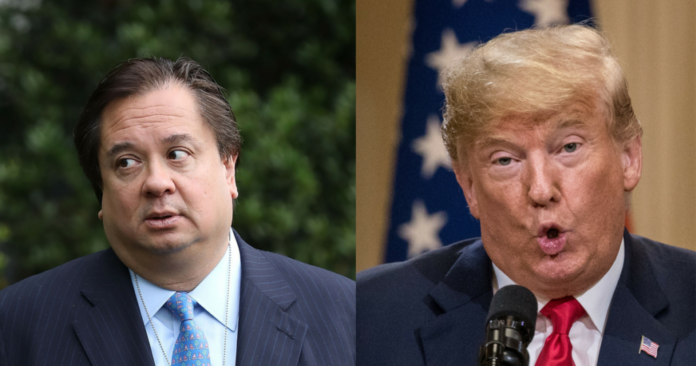 President Donald Trump’s poll numbers against all the top Democrats running to oust him in 2020 do not look good, something Kellyanne Conway’s husband George Conway gleefully pointed out to Trump supporters on Twitter Tuesday.

The latest Quinnipiac poll reveals that Trump loses every head-to-head match-up by at least five points against six of the top candidates in the field.

Trump loses big to former Vice-President Joe Biden 53-40 while Senator Bernie Sanders (D-Vt.) beats him 51-42. Next up is Senator Kamala Harris, who leads Trump 49-41, and Senator Elizabeth Warren is leading her match-up against Trump 49-42. South Bend, Indiana Mayor Pete Buttigieg leads him 47-42, and so does Senator Cory Booker (D-N.J.).

These are not good signs for Trump. Again, even Booker is beating him.

“The head-to-head matchups give this heads up to President Donald Trump’s team: Former Vice President Joseph Biden and other Democratic contenders would beat the president if the election were held today,” poll director Tim Malloy explained. Leads range from Biden’s 13 percentage points to thin five-point leads by Mayor Pete Buttigieg and Sen. Cory Booker. It’s a long 17 months to Election Day, but Joe Biden is ahead by landslide proportions.”

These are worse polls for Trump than he had against Hillary Clinton in 2016, and even Conway, whose wife ran a polling firm, explained just how bad the poll is for Trump.

The real significance of the new Q numbers is that Trump tops out at 42%, no matter who he’s matched up against. That’s disastrous for any incumbent, whether he or she is running for dogcatcher or president.

Trump’s instability and constant lying is apparently causing Americans to reach their breaking point. Still, Trump is still supported by at least 40 percent of Americans in the poll against all candidates and still has over 90 percent support from Republicans.

However, that latter statistic doesn’t mean a whole lot since the Republican Party has been shrinking because many are abandoning the party, leaving only the extremists.

It’s little wonder why Trump is welcoming foreign interference during the 2020 Election. That’s the only way he can win if he doesn’t want to be prosecuted for committing obstruction of justice and other crimes. That is, if he doesn’t refuse to leave office after defeat.

The question is who will defeat him? Several Democrats are more than qualified and have the guts to take on Trump. Biden skewered him in Iowa on Tuesday night, and Trump is clearly scared of Biden based on how much Trump has been attacking him as of late.

Harris and Warren are also major threats to Trump, as is the young Buttigieg, a contrast of Trump in every way. And Sanders certainly represents a battle of economic views that he would certainly win in any debate against Trump.

Conway is certainly right. If these poll numbers hold steady or drop because Trump continues being erratic, hateful and incompetent, he won’t stand a chance. Americans just have to make sure they vote no matter what on Election Day.