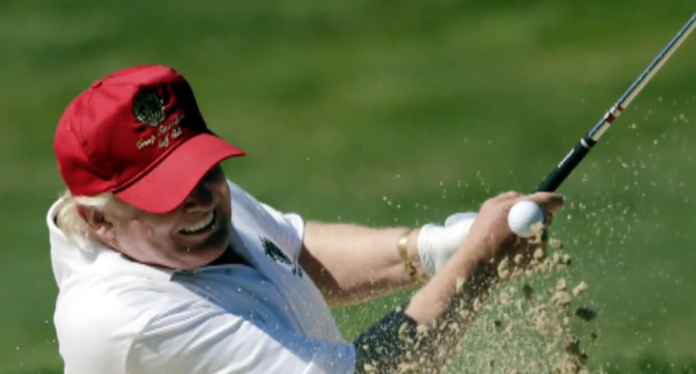 President Donald Trump doesn’t just cheat on his wives or to win presidential elections, he also cheats at golf according to a longtime Sports Illustrated writer. And the revelation made George Conway’s day on Tuesday.

Rick Reilly retired from his work with the publication some years ago but decided to come out of retirement to write a book outing Trump’s constant cheating at golf to refute Trump’s boasts about winning so many club championships.

You know, because Trump’s ego won’t even allow him to admit he sucks at anything even though everyone knows he is bad at politics, business and golf.

As the Associated Press reported the story, Conway took a special interest and posted a Twitter thread all about Trump’s cheating methods, a wonderful addition to his past tweets slamming Trump.

“[G]olf is a game of honor in which individual players act as their own referees, keep their own scores and assess themselves penalties for rule violations. Trump’s cheating, Reilly said, motivated him to write the book.” https://t.co/bEIiIbN3JT

“‘In golf, he’s definitely not exonerated,’Reilly told The Associated Press. ‘There’s been dozens and dozens of people that can declare him guilty of cheating.’”https://t.co/kYH5E4z2qM

“Reilly writes, ‘The caddies got so used to seeing him kick his ball back onto the fairway they came up with a nickname for him: “Pele.”’That’s the world soccer star from Brazil.”https://t.co/kYH5E4z2qM

“Sports announcer Mike Tirico says Trump once threw Tirico’s golf ball off the green into a nearby bunker when they played together.”https://t.co/DOPf5eCyGc

“At Trump Bedminster in New Jersey, Trump once won a senior club championship from 87 miles away.”

“Final score on the ‘18 club championships’: Lies 16, Incompletes 2, Confirms 0. By this time, Trump’s nose has grown so long he could putt with it.”https://t.co/kecZKodjwi

He may not be as good at golf as he makes himself out to be—but he’s still an Olympic-caliber liar. https://t.co/nMVk68SJA9

Reilly would later appear on “Morning Joe” to discuss his book.

It turns out Reilly has played golf with Trump before, so he knows all about Trump’s cheating first-hand. Trump has also told him how he cheats.

“When you walk into the clubhouse, his name — instead of ‘Joe Shmoe,’ it’s Trump,” Reilly continued. “The thing that bothers me — okay, golf, fine. But when he started campaigning on this as, ‘I’m a winner, I can close out, I’ve won 18 club championships, and that’s against the best players.’ That bothered me. I don’t know anything about politics, you guys know about politics, but I know about golf. You don’t get to do that.”

Clearly, Trump has cheated his way through life in one way or another and it’s long past due to catch up to him.