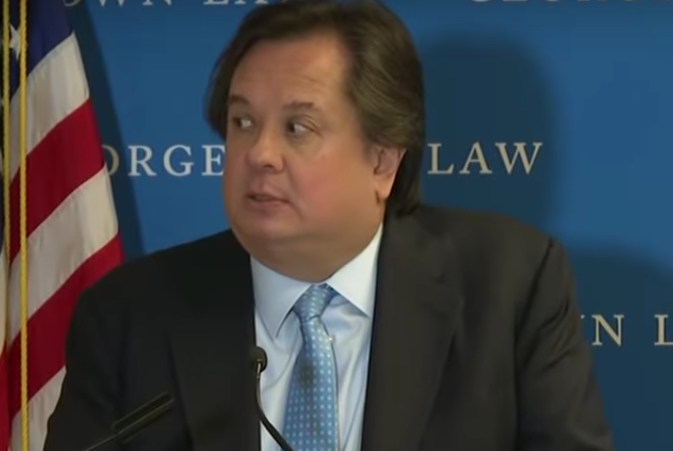 President Donald Trump attempted to prove that he isn’t racist on Sunday by retweeting notorious United Kingdom right-wing racist Katie Hopkins. And Kellyanne Conway’s husband George Conway didn’t let him get away with it.

Just one week ago, Trump posted a racist tweet aimed at four Democratic congresswomen of color demanding they go back to the countries they came from just because they criticize him and the institutional racism and inequality that poisons this nation.

Then he doubled down at a rally in North Carolina where the crowd chanted “send her back” after trump attacked Rep. Ilhan Omar (D-Minn.). And he stood there for 13 seconds and let them do it.

Trump has since thrown his supporters under the bus by blaming them for the racist chant and has desperately tried to convince everyone that he isn’t a racist.

First, he retweeted her defense of him, which was basically her agreeing that Democrats should leave the country while accusing them of supporting ISIS.

Then Hopkins wished Trump was Prime Minister in her country, where most citizens hate him.

How I wish we had such leadership in the U.K.

Trump does not give offence. #TheSquad choose to take it. #TheSquad need to make better decisions pic.twitter.com/PfxXp4FOrg

With the incompetent Mayor of London, you will never have safe streets! https://t.co/pJqL1NjyvA

Trump then proudly posted her video of his rally speech, including the 12 seconds he stood silently and did nothing to stop his supporters from spouting their racist chant.

As you can see, I did nothing to lead people on, nor was I particularly happy with their chant. Just a very big and patriotic crowd. They love the USA! https://t.co/6IVKEffNnq

As if that’s not enough proof that Trump is a racist, George Conway pointed out that Trump is parroting a woman who has referred to immigrants as “cockroaches” and “feral humans.”

So the President is the United States is (again) retweeting a woman who once wrote a column saying migrants were “cockroaches” and “feral humans” and “spreading like the norovirus,” and once tweeted, “Racial profiling is a good thing. Call me racist, I don’t care.” pic.twitter.com/NKJLhh4JEI

Trump faceplanted as usual. Using the words of another racist as “proof” that you are not racist just doesn’t win any points, especially when that person is repeating the same racist phrases.

This president is a racist monster, and the House of Representatives rightly condemned him for it while Republicans have cowardly refused to do the same. At least Conway isn’t a coward. Now he just has to convince his wife to stop being one.