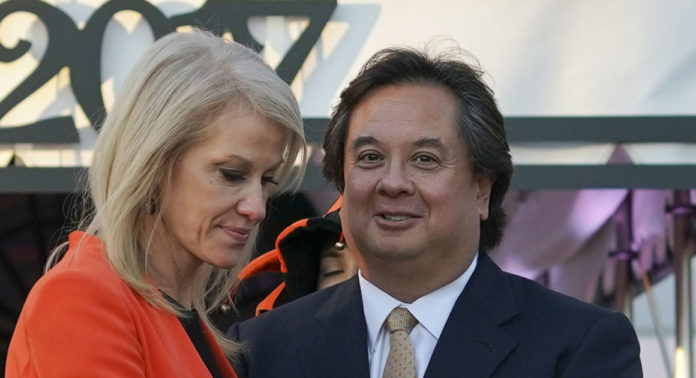 Kellyanne Conway’s husband George Conway sounded off on Twitter again Sunday with a devastating tweet trashing White House standards of presidential conduct in response to White House chief of staff Mick Mulvaney arguing that President Donald Trump’s behavior has nothing to do with ethics and morality.

Mulvaney shrugged off the ethical and moral questions surrounding Trump’s actions, and even ignored the fact that Trump is still being investigated by federal prosecutors for committing state and federal crimes, including campaign finance felonies, tax evasion and insurance fraud. Not even the Mueller report has completely exonerated Trump, as Attorney General William Barr stated in his summary.

In response to Mulvaney’s refusal to address ethics and morality, Conway blasted the White House and Fox News.

Of course. The White House’s standard for presidential conduct is that, as long as the president is not found by a unanimous jury of Fox News talk-show hosts to be guilty of multiple federal criminal offenses beyond a reasonable doubt, everything’s hunky-dory. https://t.co/t0BbEHBpNx

Indeed, even if the Mueller report determined that Trump committed conspiracy he would still be insisting that he is innocent and that the probe is a witch hunt. Fox News would then follow up by parroting him and portraying the probe as some “Deep State” conspiracy. For example, Chris Wallace had to fact-check his own colleague on Saturday for making false claims about how the investigation started.

As president, Trump has failed to bring dignity and grace to the office. In fact, he has done nothing but disgrace it and abuse it.

Conway was not done, however. After Senator Lindsey Graham (R-S.C.) claimed that Trump “can’t even collude with his own government,” Conway took the time to give thanks for Trump’s “ineptitude” because he could do much worse damage to the nation had he been able to work efficiently when Republicans controlled Congress.

Senator Graham nails it here. Always to be remembered about Trump: However great his malevolence and derangement may be, they are vastly exceeded by his remarkable ineptitude. For this we should give eternal thanks. https://t.co/N37TLyEA0O

Conway’s tweets follow his wife’s appearance on Fox News Sunday, where she largely refused to comment on his rebukes of her boss.