The United States Blues
Home Elections George Will responds to Mueller report by writing that Americans want a... 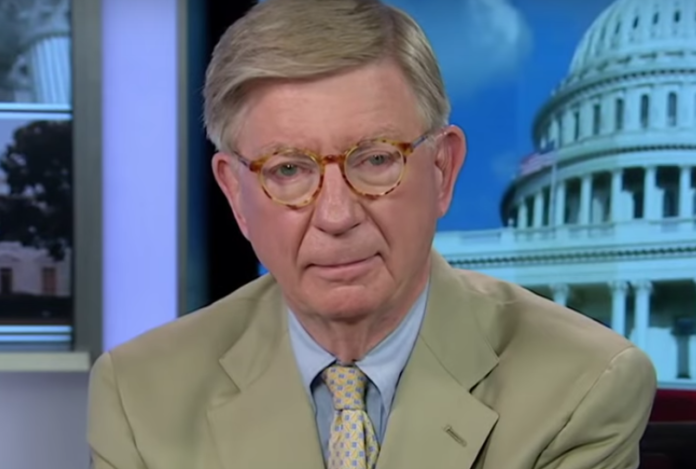 Conservative columnist George Will responded to the Mueller report on Monday by calling it a “gift” to Democrats and that Americans want a president who doesn’t embarrass the nation.

According to Attorney General William Barr’s summary, the Mueller report supposedly clears President Donald Trump of collusion but does not exonerate him for obstruction of justice, which Barr has decided that Trump did not do. Not surprising since Barr is Trump’s newest toady, basically trading in former fixer Michael Cohen for a new one.

Democrats are fighting for the full report to be released, but Will argued in an op-ed for the Washington Post that the report is a “gift” to Democrats because they will now fight even harder to win the 2020 Election.

“The report is an even larger gift to the nation because it might help stabilize the Democratic Party — if the party reacts more reasonably to it than most of the party’s most conspicuous presidential candidates have been reacting to the political stimuli of 2019,” Will wrote. “What Mueller’s report makes possible is something like a normal presidential election in 2020.”

Had the report definitively incriminated Trump, Democrats might have relaxed thinking they could cruise to an easy victory, only to suffer another surprising defeat. Now Democrats have to fight even harder and can run by focusing on Trump’s pathetic record, which includes failed tax cuts, a slipping economy that is on the verge of recession, a ballooning deficit, a debilitating and record-breaking trade deficit caused by harmful trade wars, a weak foreign policy that has seen dictators walk all over the United States and our allies, and multiple scandals that have repeatedly humiliated the country.

“The world’s oldest and, by reasonable metrics, greatest political party, which led this nation through two world wars and its worst economic crisis,” Will writes, simply needs to return to the greatness experienced during the progressive era and provide voters with normalcy.

“An embarrassed nation aches for a president who is one thing: normal,” he wrote. “The 2016 election changed the nation’s too serene sense of itself as immune to the sort of grotesque electoral outcomes that other nations experience. After Mueller’s report, the 2020 election will be about various normal issues — health care, the economy’s strength and the equity of its results, etc. — but above all it will be about this: Is the current tone of public life, which is set by the president, the best America can do?”

“Thanks to Mueller, the 2020 campaign will not be about the 2016 campaign,” Will concluded. “It will be about a post-Trump future — if unhinged Democrats can stop auctioning themselves to their party’s most clamorous factions, thereby making Trump seem to be what Mueller’s report does not say that he is: acceptable.”

Democrats need to be the normal party and offer Americans ideas that make our nation’s future brighter. By and large, some are already doing that, including South Bend, Indiana Mayor Pete Buttigieg, who has become a rising star. The question is will Democrats nominate the right candidate, or will we pick another nominee who thinks they can coast to the White House without visiting key states and connecting with every voter possible?

It’s sink or swim time for Democrats. And if they don’t win this time, America loses and may not ever get another chance at normalcy again.