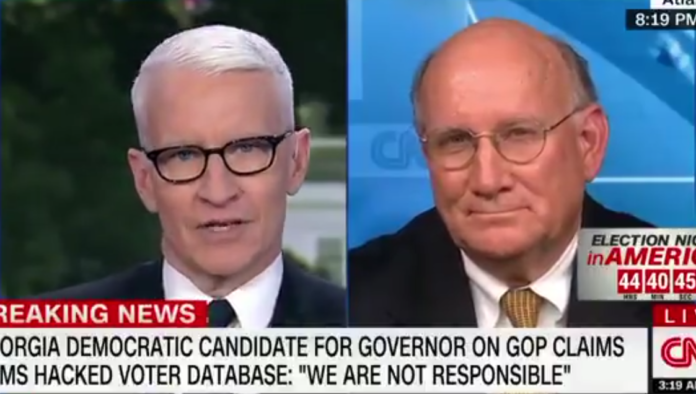 Georgia Secretary of State and Republican gubernatorial candidate Brian Kemp accused Democrats of hacking the state voter registration system on Sunday without offering any evidence to back up his claims. On CNN, Georgia Democratic Party chairman DuBose Porter explained why.

“While we cannot comment on the specifics of an ongoing investigation, I can confirm that the Democratic Party of Georgia is under investigation for possible cyber crimes,” press secretary Candice Broce said in a statement. “We can also confirm that no personal data was breached and our system remains secure.”

The reason why they can’t comment on the “specifics” probably is because the alleged hacking never happened.

Porter told CNN anchor Anderson Cooper that the FBI handles such investigations but the federal law enforcement agency has not contacted him or any other state Democratic Party official.

“This is simply an attempt to detract from his own record,” Porter said. “Remember, this is a Secretary of State that mistakenly released 6 million voters’ Social Security numbers twice. What’s unnerving is that he has used the Secretary of State’s office and its official spokesperson on this made-up story.”

Kemp has also made an effort to purge thousands of voters from the voting rolls in order to keep them from voting for his opponent Stacey Abrams in what has turned out to be a close race that she actually leads by a razor-thin margin. It’s not a stretch to believe that he would make up false hacking allegations in order to smear Democrats.

“But the FBI, they are investigating, aren’t they?” Cooper asked in response.

“Not that we’re aware of, because there’s no hacking,” Porter replied. “There’s no attempt of any hacking from the Democratic Party. This is another part of his attempt to suppress the vote, to make people scared of going to the polls on Tuesday because the only way to fight abuse like this is to go to the polls and outvote him, beat him at the polls. That’s what I’m asking them to do because this is absolutely outrageous.”

“Absolutely not… it’s a made up story.” Chairman of the Democratic Party of Georgia, DuBose Porter, denies the Georgia Democratic Party was involved in any supposed attempted hack of the state’s voter registration system. https://t.co/Ppz2OJU8Ew pic.twitter.com/Mzvs8Slf25

So, the FBI has not contacted the accused in regard to the allegations and Kemp refuses to show proof that Democrats committed a crime. Those facts, plus the fact that this witch hunt was launched just days before Election Day makes Kemp look like a desperate man who is willing to abuse his power in any way necessary to advance his political career.

This smells fishy and the people of Georgia deserve answers if Kemp seriously expects them to vote for him.