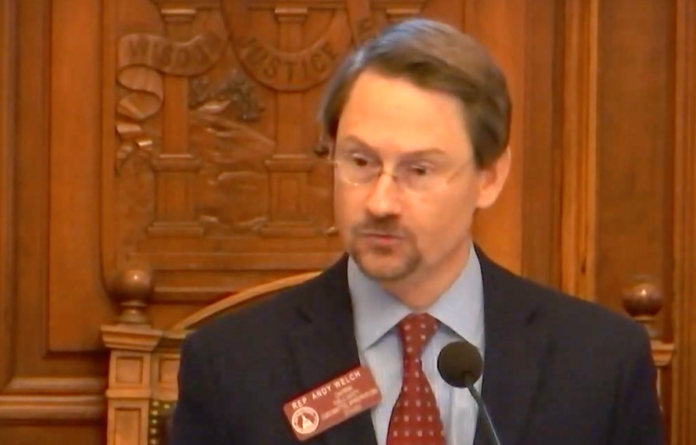 The state of Georgia seems intent on being the first state to convert to full Handmaid’s Tale, after lawmakers passed one of the “most restrictive abortion bans in the country” last week. Now it seems they are descending into attacks on the free press, as six Republican state representatives introduced a bill to create a “journalism ethics board.”

The move seems inspired by a President who has relentlessly targeted the media as the “enemy of the people.”

Already struggling news organizations would be required to foot the bill for any person they interview if they request copies of pictures, or audio and video recordings of interviews. If the journalist is unable to provide the material for free, they risk civil penalties.

The bill was sponsored by Representative Andy Welch, who will retire on Tuesday. His legacy will be House Bill 734, dubiously titled the “Ethics in Journalism Act.” The next legislative session will decide its fate. It seems Welch has planted this attack on the press on his way out the door.

Some Georgia House Republicans want to create a stricter code of ethics … not for themselves but for journalists. Cc @Poynter @CJR #gapol https://t.co/z3oVkzlieY

“The bill would create a board of media professionals and academics that would produce ‘a canon of ethics’ and ‘develop a voluntary accreditation process in journalism ethics,’ which would also allow for the investigation and sanctioning of journalists.”

The legislation may not give the board broad power to punish journalists, but would nevertheless serve to inhibit free speech.

“The proposed board appears to have little power to punish journalists other than to remove its own accreditation or impose a penalty if the interview request provision is not met.”

“So now we’re going as far as ignoring the constitution and freedom of press. Get it together Georgia.

If Republicans have a genuine interest in strengthening journalism ethics, they could bring back the Fairness Doctrine eliminated during the presidency of Ronald Reagan. They won’t, because eliminating the doctrine allowed for the creation of one-sided partisan news channels. This allowed channels like Fox News and conservative talk radio to flourish.

Today, Fox may be the only channel many Republicans ever watch, which means they are not exposed to both sides of issues and only get a small part of the full story.

It’s life in a distorted bubble that helps create a divided country, one which can’t even agree on what facts are anymore.

Ted Koppel on @CBSSunday explaining the repeal of the Fairness Doctrine & how America ended up with so much right wing propoganda on NEWS directed programspic.twitter.com/NQPQEjoudq

“Frankly, this is the kind of proposal one would expect to surface in a banana republic, not the Peach State.”

We agree with @griffiths: “Frankly, this is the kind of proposal one would expect to surface in a banana republic, not the Peach State.”https://t.co/6ppZE2BIC0