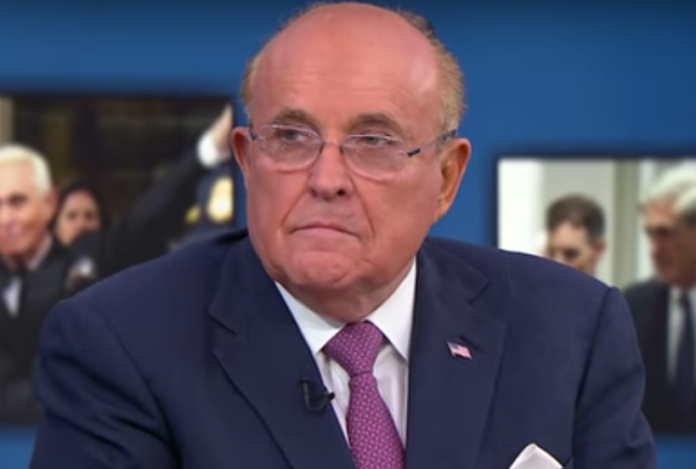 Most Americans and many members of Congress want the full report released, especially since Barr and Trump are so desperate to bury it even though they have claimed it exonerates him.

Trump has claimed that he won’t invoke executive privilege to keep parts of the document secret, but Giuliani backtracked on that while speaking to CBS host Margaret Brennan.

“The president’s cooperation with this investigation was unprecedented, Giuliani began. “Bill Clinton fought every single subpoena and it was a knock down drag out battle.”

Brennan reminded Giuliani that Clinton had to sit down with then-Special Counsel Kenneth Starr because he lost the battle. Meanwhile, Trump didn’t sit down with Mueller at all.

Giuliani insisted that Mueller would have lost in court had he subpoenaed Trump even though Starr did not lose when he subpoenaed Clinton.

“They couldn’t suggest a question they didn’t have the answer to because we supplied them the answers to everything,” he absurdly claimed. Giuliani then excused Trump not talking to Mueller because he answered questions in writing.

Except that there are lots of questions Mueller did not ask Trump because he didn’t get to interview him, nor did Trump’s children answer any questions either. Of course, the Mueller report could confirm or refute Giuliani’s claims, but Barr won’t release it.

Brennan then asked if Trump is waving executive privilege so that Attorney General William Barr can release the Mueller report.

“So there will be information withheld?” Brennan asked.

“I don’t know,” Giuliani said. “The AG has said he’s going to put up the maximum amount possible. The only thing that will stop him will be legal barriers.”

.@RudyGiuliani says the president “can’t wave all executive privilege” but can’t say whether info will be withheld from the Mueller report. “I don’t know. The AG has said he’s going to put up the maximum amount…possible. The only thing that will stop him will be legal barriers” pic.twitter.com/cTYb4qfuzv

The problem is that the president should not be able to decide what parts of the Mueller report can or cannot be released. This investigation was about him and his actions during the election and his efforts to obstruct the probe. If this report really did exonerate him, he should have no problem releasing it in full so the American people and Congress can read it for themselves. The fact that Trump and Barr are going to such lengths to bury it suggests the report is far more damaging to Trump than Barr claimed in his pathetic four-page summary.