The United States Blues
Home News Giuliani Accuses Mueller Of Being ‘Un-American’ For Seeking The Truth About Trump... 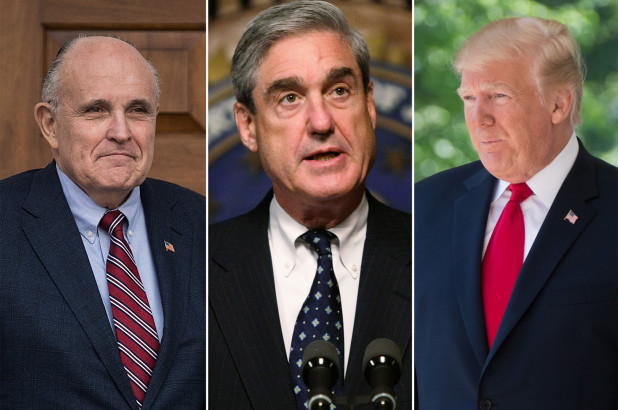 Giuliani and Trump have both stepped up their whining about Mueller and the Russia investigation in recent weeks as the former FBI Director and federal prosecutor closes in on the White House and readies his final report, which looks more and more like it will be damning for Trump and his cronies.

One way Giuliani and Trump have been attacking Mueller is by accusing him of bullying Paul Manafort and others who have taken plea deals into telling him lies about Trump.

The problem with that accusation, however, is that Mueller is extracting the truth using tried and true methods that even Giuliani himself once used as a federal prosecutor, which involves finding solid evidence to indict and prosecute lower level thugs and use it as leverage to get them to testify against bigger fish. But they have to tell the truth because they could lose any plea deal reached if they lie. Paul Manafort lied to Mueller and acted as a mole to provide Trump and his legal team with information about the probe and got caught.

The bottom line is that Mueller is going by the book and Giuliani knows it, but he’s desperate to help Trump evade justice so he slandered and smeared Mueller to make him look dirty.

“I think the special prosecutor has stepped over the line, now, with the way he’s intimidating people in order to tell what he believes is his version of the truth,” Giuliani claimed. “They want [Manafort] to give certain forms of evidence that would implicate the president in things that Mr. Manafort says are untrue. And at some point, after you do this four, five, six times, you’ve got to accept the fact that, well, Mr. Manafort maybe doesn’t have the recollection they’d like, and they are pressuring him and creating the real risk that the man might commit perjury.”

Again, Mueller apparently has proof that Manafort lied to him after accepting a plea deal, which is a really stupid thing to do. And if Manafort is willing to lie about some things, he’s likely willing to lie about bigger things, especially if he still thinks he can get a pardon, which Mueller ensured wouldn’t bail Manafort out anyway because Mueller made sure Manafort pleaded guilty to state crimes when he signed the deal, making it pardon proof.

“An ethical prosecutor would stop this, and pursue some other line of inquiry with other people,” Giuliani continued, going on to call Mueller “un-American.”

“They are treating him like he’s a terrorist,” he said.

Again, Mueller is using perfectly accepted legal prosecutorial tactics and he has a team of prosecutors and investigators who have a mountain of evidence backing them up. Mueller’s tactics are the exact same that Giuliani used to fight organized crime when he was a federal prosecutor. He knows this, but he is so blinded by his support for Trump that he is willing to slander and smear a highly respected man in order to get Trump and his buddies off the hook. He can whine all he wants, but it’s not going to stop Mueller from seeking the truth about Trump and Russia.

Because if Mueller were using such “oppressive” and “unethical” tactics, a federal judge would have thrown out all of the plea deals and indictments he has gotten long before now.