The United States Blues
Home News Giuliani doubles down: Will issue report of his own if Mueller report... 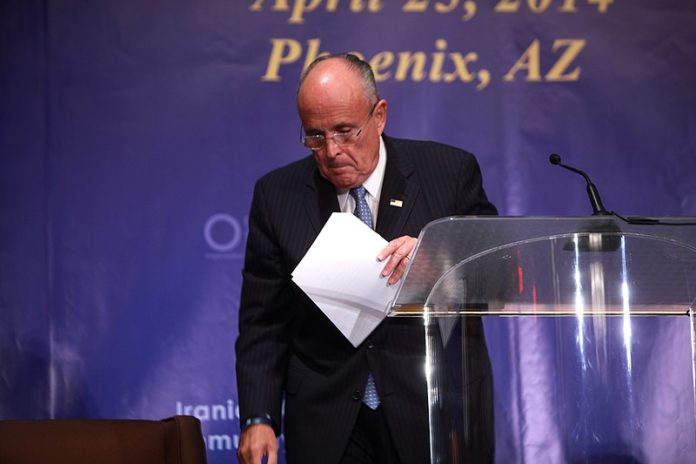 President Donald Trump’s bumbling attorney Rudy Giuliani adamantly doubled down this week on his claim that he will issue a rebuttal clearing Trump of any wrongdoing if Special Counsel Robert Mueller’s report is damaging to his client.

Mueller’s final assessment to conclude his role in the Russia investigation is reportedly due to be submitted next week. Trump himself has since reacted to the report by insisting that Senate Intelligence Committee chairman Richard Burr’s (R-N.C.) personal conclusion be considered the true verdict in a desperate effort to discredit the report.

On top of that, Giuliani is apparently following through on his claim that he will write an alternative report as a rebuttal to Mueller’s that would clear Trump in the event Mueller’s report incriminates him.

According to USA TODAY:

Giuliani told USA TODAY that it’s been “weeks” since Mueller’s team has contacted the president’s attorneys, and there has been no further discussion about obtaining additional testimony from the president for about a month.

He said the extended period of “silence” has the president’s lawyers preparing for Mueller’s required notification to new Attorney General William Barr that the special counsel’s work has been completed.

“We expect something in the next two weeks,” Giuliani said.

He said the legal team has been preparing a report of its own that, depending on Mueller’s findings, may be made public.

“If (Mueller) clears the president, we walk away and say, ‘Thank you.’ If it is damaging, then we will respond,” he said.

Again, Giuliani has already said he would write a report of his own.

During an interview with Sean Hannity at the beginning of the year, he smeared Mueller and his team before opining when the investigation will end.

“It ends when he files his report and we can answer it, whatever garbage he has,” Giuliani said.

“Will there be a Giuliani report?” Hannity asked.

“Damn right there will be a Giuliani report,” Giuliani claimed. “Our report will be the definitive report cause it will be the truth. The president did nothing wrong.”

Clearly, Giuliani intends to write a report proclaiming Trump’s innocence even though he won’t have access to the evidence Mueller has. Only if Mueller’s report clears Trump will he accept it. He’ll reject anything other than complete and total vindication.

Trump’s lawyer has even demanded that he and Trump be allowed to see the report so they can “correct” it before it is released.

But any report he writes won’t be enough to save Trump, especially since Giuliani has already publicly admitted that Trump’s campaign colluded with Russia in 2016.

Panic and dread are setting in on Trump and his legal team as the American people await a report that has been anticipated for almost two years. It’s clear that Mueller’s report should be immediately released in its entirety to prevent any tampering, especially since trying to keep it secret will only make Trump look guilty. Instead of writing a work of fiction to counter Mueller’s report, Giuliani should start working on an apology to the nation for agreeing to represent Trump in the first place.