The United States Blues
Home News Giuliani gets roasted by former federal prosecutors for trying to collude with... 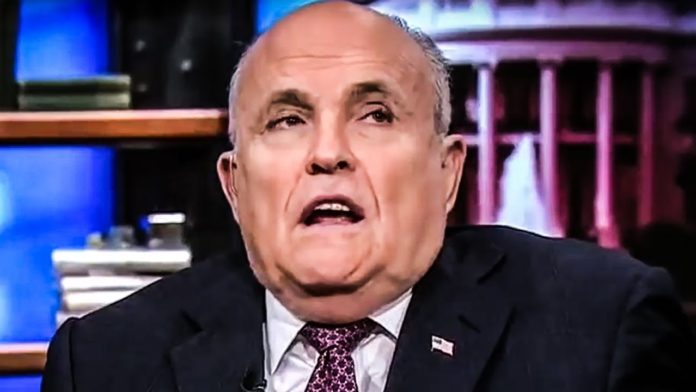 President Donald Trump’s lawyer Rudy Giuliani is in some legal hot water this week after he attempted to travel to Ukraine in order to get prosecutors there to investigate former Vice-President Joe Biden in a bald-faced effort to help Trump win in 2020.

Let’s be clear, Trump literally sent Giuliani to collude with Ukraine to hurt his potential Democratic opponent in the upcoming election. The outcry was so powerful that Giuliani had to cancel his trip, but Ukraine has already received his message, which is the same message Trump sent to Russia during the 2016 campaign when he asked them to find dirt on Hillary Clinton.

“I think the reason Rudy canceled his trip here is that his conduct was tantamount to a conspiracy and probably would have been an outright violation of the law,” Joyce Vance said. “He said he was going to Ukraine to get them to engage in an investigation that would benefit Donald Trump. He was going over to make the offer for Ukraine to enter into a conspiracy with him. That would not have been difficult for prosecutors to prove even with that valuation issue.”

“He would have fallen right through the thin ice,” he told Reid. “And how in the world — it’s not like Rudy Giuliani didn’t know, hmm, there might be some issue with me colluding with a foreign power to get dirt on a political adversary. By the president refusing to condemn this, he’s encouraging it. He is all but saying, ‘Russia, if you are listening, 2020 is coming up. We are going to need your help again.’ If we don’t start wrestling with some of these reforms you know we are going to be in a very sorry place as a republic.”

Why is the president’s personal attorney seeking to persuade a foreign government to investigate his political rival? Be sure to review 18 U.S.C. § 201, the one ethics law that applies to the president, before you offer any quid pro quo for the Ukranian investigation. https://t.co/IBnCoGiKjV

Getting a foreign power to investigate your political opponent could be a “thing of value” and therefore possibly part of a criminal scheme. The really frightening thing to me is that I have no faith this DOJ will honestly look at that question. https://t.co/kuT0oUBlM5

Giuliani has already sent a message to foreign entities without physically making the trip.

Trump is sending Giuliani to Ukraine to get its government to help Trump win reelection by hurting Joe Biden’s family. Read that a few times and ask yourself: How is that not an impeachable offense in broad daylight?

Sitting presidents don’t have private emissaries to foreign governments. Ukraine will understand this for what it is – the full weight of the US presidency leaning on it to harm the president’s domestic political opponents. https://t.co/A4Fk3BYxHD

Trump is making it clear that he intends to do whatever it takes to win re-election, even turning to foreign nations for help and using the Department of Justice as a weapon against his political opponents. This is authoritarianism run amok and even Republicans have to recognize how bad this looks on their party. The time to impeach Trump is now. Because if Republicans don’t do the right thing, history and the American people will hold this against them for all eternity.