The United States Blues
Home News Giuliani Has Embarrassing Hissy Fit After CNN Calls Him Out For His... 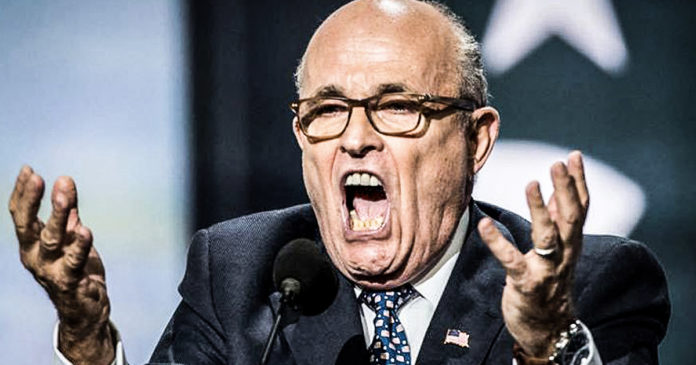 Just hours after CNN caught Rudy Giuliani in a blatant lie about his client, President Donald Trump, signing a letter of intent to build a Trump Tower Moscow, Giuliani angrily ranted in an interview with the New York Daily News, calling the entire matter “bullshit.”

Having already said Trump didn’t sign the letter when asked by CNN reporter Dana Bash, Giuliani tried to suggest that he had never said any such thing:

“I don’t think I said nobody signed it.”

Contradicting earlier statements, Giuliani conceded that “of course” Trump had signed the letter of intent, adding:

“How could you send it but nobody signed it?”

Seconds later, however, Giuliani tried desperately to pretend the entire issue was “bullshit” because the project was never formalized or built:

“That was the end of it. It means nothing but an expression of interest that means very little unless it goes to a contract and it never did.”

But the problem for Trump remains that he did indeed have detailed discussions with Russian officials about a building project in Moscow, even going so far as to allegedly offer Russian President Vladimir Putin a multi-million dollar penthouse suite at the hotel if he would make sure it was approved by authorities.

Trump was also in discussions with Russian officials about building the Moscow Trump Tower in the weeks leading up the 2016 election, despite repeated denials that he had any business interests or investments in Russia. Giuliani was asked about that by the Daily News and tried to minimize the import of such a fact:

“Trump doesn’t remember exactly when the discussions stopped. His answer made sure it could cover up until November 2016.”

The larger point, however, is that both the president and his attorney have been caught in yet another blatant lie. If the Moscow Trump Tower deal was no big deal, then why did Trump keep it hidden?

Rest assured Robert Mueller will eventually get to the bottom of this and other inconsistencies in due time.