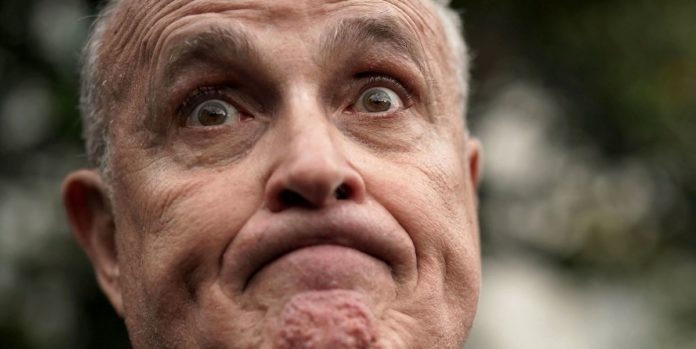 Rudy Giuliani, who serves as President Donald Trump’s part-time personal attorney and full-time conspiracy theorist, went on a strange late-night tweetstorm which seems to have been little more than an attempt to divert attention away from the growing Ukraine scandal that now threatens to consume the White House.

Among the unproven allegations in Giuliani’s tweetstorm: That the Ukrainian government laundered $3 million through the former Vice President Joe Biden’s son, Hunter, and that President Obama knew it was happening but did nothing.

NEW FACT: One $3million payment to Biden’s son from Ukraine to Latvia to Cyprus to US. When Prosecutor asked Cyprus for amount going to son, he was told US embassy (Obama’s) instructed them not to provide the amount. Prosecutor getting too close to son and Biden had him fired.

Did Obama know that his VP, the one he put in charge of giving billions to Ukraine, had a son who was making millions on the board of one of the most corrupt companies in Ukraine. Biden’s boss had stolen $5b from Ukraine and was a fugitive. Did Obama know? Did he approve?

Biden scandal only beginning. Lots more evidence on Ukraine like today’s money laundering of $3 million. 4 or 5 big disclosures. Also the $1.5 billion China gave to Biden’s fund while Joe was, as usual, failing in his negotiations with China is worse.

If Dem party doesn’t call for investigation of Bidens’ millions from Ukraine and billions from China, they will own it. Bidens’ made big money selling public office. How could Obama have allowed this to happen? Will Dems continue to condone and enable this kind pay-for-play?

Much like President Donald Trump, Rudy sounds worried and seems desperate to throw as much mud against the wall in an effort to see what will stick. But at the moment, the biggest scandal of them all is that a sitting president attempted to coerce a foreign leader to dig up or fabricate dirt on a political opponent. That certainly qualifies as a high crime and misdemeanor, and it suggests Trump is indeed worried he cannot win in 2020 unless he manages to slag whoever winds up being the Democratic nominee.