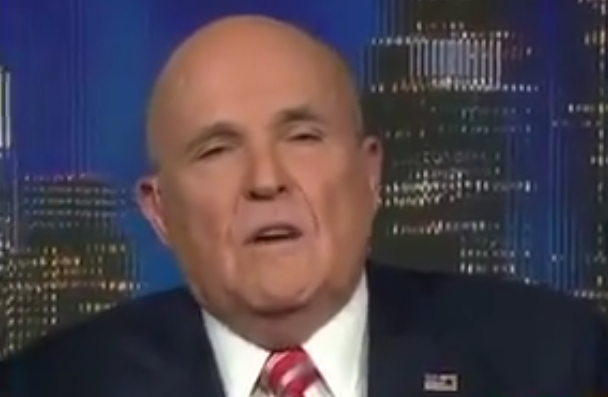 President Donald Trump’s lawyer Rudy Giuliani threw the Trump campaign under the bus on Wednesday night in defense of his client during an epic interview with CNN host Chris Cuomo.

In an interview that is sure to be talked about for the next several days, Cuomo repeatedly fact-checked a flustered Giuliani, who railed against the Russia investigation headed by Special Counsel Robert Mueller.

But first, Giuliani launched an attack on the media by accusing them of “false reporting,” which drew an immediate retort from Cuomo, who conducted a simply brilliant interview and did a flawless job fact-checking Giuliani.

Indeed, Manafort literally did give internal campaign polling data to a Russian oligarch who wanted to be briefed about Trump’s campaign.

And that’s when Giuliani once again put his foot in his mouth.

“Well, you just misstated my position,” he claimed. “I never said there was no collusion by the campaign or between people in the campaign.”

Giuliani just admitted that there was collusion, but it was Trump’s campaign team that did it.

That statement alone should send Trump campaign members running frantically to Mueller to make a deal because Giuliani just sold them all out to protect Trump, who has repeatedly insisted that there was “no collusion” by his campaign or himself.

When Cuomo pointed that out, Giuliani became defensive.

Giuliani now says others on the campaign—but not the President—might have colluded with Russia. And Cuomo’s eyebrows might win an Emmy for the reaction. pic.twitter.com/usGMCnUnKa

Of course, that’s not true either. A federal judge recently ruled that collusion is a crime. There’s also obstruction of justice and perjury. In addition, Trump is on video asking the Russians to find Hillary Clinton’s emails, an order they immediately followed by hacking the DNC and the Clinton campaign. That makes him culpable.

Giuliani would later flip-flop by claiming collusion did not happen.

“If the collusion happened, it happened a long time ago,” he said. “It’s either provable or it’s not. It’s not provable because it never happened…there’s no chance it happened.”

.@RudyGiuliani allows for the possibility of collusion with the campaign while saying it didn’t happen.

“If the collusion happened, it happened a long time ago. It’s either provable or it’s not. It’s not provable because it never happened…. there’s no chance it happened.” pic.twitter.com/gZKZGRksdN

It’s statements like these from Giuliani that have prevented Mueller from finishing the probe. After all, if Giuliani is going to come out and admit that the campaign colluded, Mueller is obligated to continue investigating, which means more Trump campaign members will be ensnared and that could lead back to Trump himself, who had to have known what his team was doing.

Either Giuliani wants Trump to get caught or he’s the most incompetent lawyer on the planet.