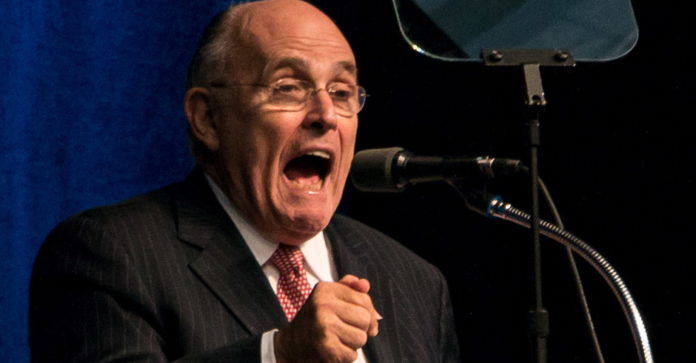 Rudy Giuliani scraped the bottom of the barrel this week in a desperate attempt to defend President Donald Trump by claiming that Trump’s crimes are no big deal because nobody got killed or robbed, resulting in yet another fantastic takedown by George Conway.

Earlier this week, Trump’s former lawyer and “fixer” Michael Cohen pleaded guilty to two campaign finance felonies he committed in coordination with and at the direction of Trump himself in concert with the National Enquirer in an effort to cover up affairs with two women that could have toppled Trump’s campaign in 2016.

Cohen has been sentenced to serve three years in prison and Trump is now an unindicted co-conspirator whose legal troubles continue to pile up as investigations roll on.

Trump’s crimes are serious, especially since committing them helped him win in 2016 and robbed the American people of information that could have swung their vote, and that’s just one reason why Giuliani’s pathetic reaction to the crimes is so bad.

“Nobody got killed, nobody got robbed,” Giuliani told The Daily Beast. “This was not a big crime. I think in two weeks they’ll start with parking tickets that haven’t been paid.”

Again, these are felony crimes that carry prison time and the crimes also mean Trump defrauded the American people and repeatedly lied about them over the last two years. There are also tapes of Trump discussing the hush money pay-offs with Cohen. These are not just minor crimes, it’s a conspiracy that is now unraveling despite Trump’s frequent efforts to undermine federal investigators.

Unimpressed with Giuliani’s latest argument, Kellyanne Conway’s husband George Conway responded by quoting the presidential oath of office and added Giuliani’s words to it to show how ridiculous an argument it is.