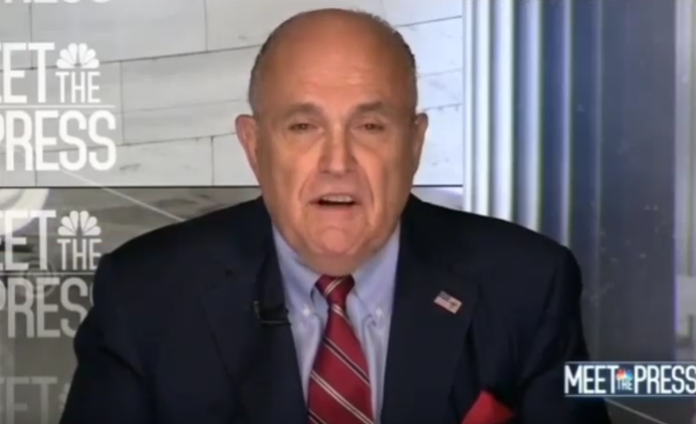 Rudy Giuliani desperately tried to claim that President Donald Trump did not commit obstruction of justice when he fired former FBI Director James Comey for not dropping the Russia investigation, arguing that it is only obstruction if Trump threatened him or his family with harm.

Trump and Giuliani have repeatedly insisted that there was no obstruction of justice when Trump fired Comey in May 2017 after Comey denied Trump’s request that he end an investigation into now disgraced former National Security Adviser Michael Flynn, who has since pleaded guilty to lying to the FBI about his contacts with Russia and has provided information to Special Counsel Robert Mueller.

We know that’s why Trump fired Comey because he bragged about it during an NBC interview with Lester Holt and to Russian officials inside the Oval Office. Each time, Trump boasted about having the pressure of the Russia probe taken off of him.

That appears to be exactly what Trump did and what he bragged about doing.

But on Sunday, Giuliani changed the definition to something more extreme in an effort to defend his client.

“A president firing somebody that works for him, if he does no other corrupt act other than just fire him, can’t obstruct justice,” Giuliani told Meet The Press host, Chuck Todd. “If, for example, a president said, ‘Leave office or I’m going to have your kids kidnapped or I’m going to break your legs.’”

“When the president said ‘Please, go easy on Flynn,’ I know of no obstruction case that begins with the word ‘please,’” he continued. “It goes something like this: ‘If you don’t go easy on Flynn, I’ll break your kneecaps.’”

“An obstruction case has to involve some degree of a corrupt act,” he concluded.

Giuliani also finally agreed that a president can be guilty of obstructing justice after Todd pointed out that Attorney General nominee William Barr broke with Giuliani and Trump on the issue.

Once again, Giuliani is moving the goalposts in order to defend his client. A president does not have to make a threat to commit obstruction. The act of trying to impede an investigation, whether Trump did so nicely or not, constitutes obstruction. He asked Comey to kill an investigation. Comey refused. And Trump fired Comey for it in the hopes that doing so would end the probe. It didn’t. Instead, Deputy Attorney General Rod Rosenstein turned the investigation over to a special counsel and appointed Mueller to serve that role. And if Trump really believes he didn’t obstruct justice, he would have no problem answering Mueller’s questions about it rather than continuing to refuse to do so.