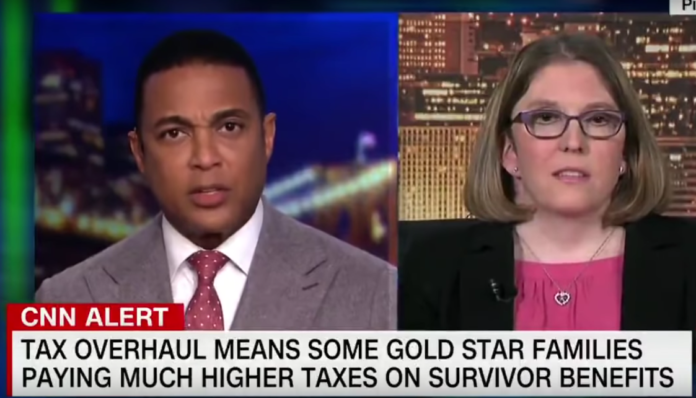 As we already know, the tax law hit Americans hard this year as it took away billions of dollars in deductions and severely reduced refunds or caused people to owe more money than they have ever owed in the past. And all while wealthy individuals and corporations pay less or nothing at all.

Even Trump supporters are finding out that they got screwed this year.

CNN host Don Lemon focused on the plight of military families in regards to the tax law this week, and told the story of the family of Army Captain Michael Braden, whose widow and child are now on the hook for thousands of dollars in taxes on survivor benefits that they need.

“Michael Braden was a Captain in the Army who lost his life in April of 2012, during his 15th tour of duty in the Middle East,” Lemon began. “Three months prior to his death, he and his wife, Jessica, adopted a son, James, who’s now nine-year-old.”

“Since his father passed in 2012, James has been receiving money as part of the survivor’s benefit plan, where every year since his father’s death, James paid roughly $1,100 in taxes,” he continued. “This year, as a result of the changes in tax code pushed through by the president and Republicans in Congress, that jumped to almost $4,500.”

“Jessica and her son, James, they are not alone,” Lemon noted. “The military publication Task and Purpose found they’re among several Gold Star Families who are facing an unexpected tax burden.”

Jessica explained that the call she received from her tax preparer was a “huge shock” because her tax burden had “quadrupled” compared to previous years, meaning Trump’s tax law caused taxes on military families and survivors to skyrocket all so that wealthy individuals and corporate CEOs who sacrifice nothing get massive tax cuts.

Lemon and his CNN team double-checked Jessica’s tax return and confirmed her story. Lemon then pointed out that the amount she is paying is “the same rate that would apply to a trust or an estate.”

“How are families like yours dealing?” he asked. “Because this is a massive tax increase.”

“It is, it’s huge,” she replied. “I mean, in some cases it’s meaning, you know, choosing between paying your taxes or paying for your car or food. I mean, it’s that dire in many cases.”

Jessica says her family and others were taken by surprise because they had no idea the tax law would raise their tax burden like this. She tried contacting the White House, but for all of Trump’s claims that he loves our soldiers and their families, Jessica found herself being hung up on instead.

“We’ve already sacrificed enough,” she concluded. “And this is just even more sacrifice.”

President Trump’s tax overhaul is forcing some military families to pay thousands of dollars more in taxes on their survivor benefits, according to a nonprofit organization that helps those families. https://t.co/l9eSWbpPgC pic.twitter.com/cv10N09AXP

Trump and Republicans who fast-tracked their tax bill into law should be ashamed of themselves. In no way can they claim to honor and care about military families if they are absolutely fine with taxing them in this way. They had to lose a loved one in order to get survivor’s benefits. They’ve more than earned it. Meanwhile, draft-dodgers like Trump get a tax cut. It should make every American sick to their stomach.