The United States Blues
Home Politics Congress GOP Is Betting On Disloyal Dems To Give Them The Edge In... 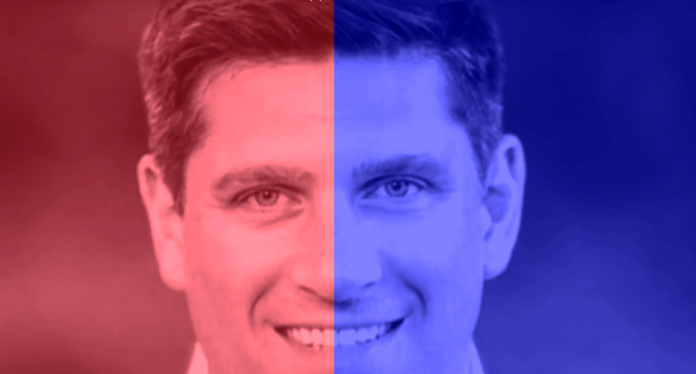 Anticipating a surge of Democratic momentum to retake control of the Senate in the November mid-terms, the GOP is eyeing key races by candidates who switched sides from Democrat to Republican. Since Republicans had no problem voting for Trump, who mostly donated to Democrats until around 2010, it appears they might ignore party loyalty questions for other candidates too. Or will they?

“In many cases, I probably identify more as Democrat,” Trump told Wolf Blitzer in 2004. “It just seems that the economy does better under the Democrats than the Republicans.”

Flash forward to today, and Republican candidates have to conduct an awkward dance of showing just the right amount of either loyalty or disdain for the always divisive Trump. In the bigger picture, more and more Americans refuse to identify with either party.

The matter becomes more complicated for those who have only recently become Republicans. POLITICO noted four major GOP candidates in “top battleground races” where their past party allegiance is now a ” hot-button topic.”

All four of these candidates cast ballots in the 2008 Democratic presidential primary. Now that could be a handicap, as their opponents use that information to suggest they are disloyal to the party and Trump.

Hyde-Smith is the current State Agriculture Commissioner, is to be appointed by the Governor to replace Senator Thad Cochran (R-Miss.), who is retiring due to health issues. She’ll serve temporarily in the seat until the Nov. 6 special election when she’ll face competition from “arch-conservative” state Sen. Chris McDaniel.

Hyde-Smith will be the first female to represent Mississippi in Congress. She and her husband raise beef cattle on their farm in Brookhaven, Mississippi. No woman had held the position of Agriculture Commissioner in Mississippi before her.

Since Wednesday, lots of people have been telling me that going to Washington is going to be like herding cats. As you might have seen from this story, I’ve got some real experience in herding cows.https://t.co/2pROcRFSsi

Hyde-Smith was a Democrat until 2010 when she switched parties to run for Agriculture Commissioner. Her opponents have seized on this news to say she is disloyal, and the White House didn’t back her selection by the Governor.

“In a betrayal of conservative, tea party principles, Governor Bryant was left to choose from his third or fourth string bench to find a willing candidate to run in November. Cindy Hyde-Smith, an opportunistic politician who switched from Democrat to Republican for her own political gain and would have supported either Barack Obama or Hillary Clinton in 2008, is already behind McDaniel on what Mississippi voters care about.”

“Instead of unifying around my candidacy, and beating the Democrats, the establishment is once again going to waste millions of dollars of donors’ money over what should have been a safe Republican seat in Mississippi,” said McDaniel.

McDaniel has made Hyde-Smith’s past voting history a primary topic of his campaign, contrasting it to his record, having become a Republican at age 13 when he “heard Ronald Reagan speak.”

Mississippians wants to know: Who did Cindy Hyde-Smith vote for?https://t.co/Iq27dOcBUw

Wishing a happy Valentine’s Day to my valentine of 26 years! pic.twitter.com/TnEo8J4xVL

He switched party affiliation in 2013 to run against Rep. Nick Rahall (D-W.Va.).

Jenkin’s campaign says he didn’t vote for Obama or Clinton in 2008, but he attended a campaign event for Clinton. He claims to have voted for Sen. John McCain (R-Ariz.).

“I am leaving Barack Obama’s party to become a Republican and run for Congress against Nick Rahall,” Jenkins said in a statement. “West Virginia is under attack from President Obama and a Democratic Party that our parents and grandparents would not recognize,” he said.

For 20 years, career politicians like Evan Jenkins and Joe Manchin have dropped the ball, and @HuntingtonCity is now the drug abuse capital of the nation. #wvsen #wvpol https://t.co/lG5gxc9sWg

Braun is a former state legislator and owner of a national auto parts distribution business.

Voting records show that Braun voted Democrat until 2012 but now bills himself as a conservative Republican. His spokesman said his votes were an attempt to “impact the outcomes of those races.” His campaign claims he always voted Republican in general elections, but the ballots are secret, so it’s hard to prove.

His hometown, Jasper, evolved from voting for conservative Democrats, shifting to Republicans after the gerrymandering by the Republican-controlled Legislature.

“Mike Braun is a lifelong Republican and this is just another tired attack from the political class,” said spokesman Josh Kelley, who added that Braun voted in Democratic primaries in an attempt to impact the outcomes of those races.

According to POLITICO, his campaign wouldn’t say who he voted for.

His voting record will lead to charges of being a “RINO,” or “Republican In Name Only” by conservatives.

Braun’s latest Tweets indicate he is trying to prove his allegiance to Trump while claiming he is a political outsider, though he served in the Indiana House of Representatives until November 2017, when he resigned to focus on his bid for Senate.

Kevin Nicholson, a businessman, and a decorated combat veteran, who was once president of the College Democrats of America, a “rising star” in the Democratic party until he resurfaced as a conservative Republican.

Although a Democrat in his college years, he apparently “discovered his inner conservatism” after dating a conservative, Jessie Roos. The two appear to have split up, fighting over his words about “a woman’s right to choose” in his convention speech.

Nicholson did a 180, becoming anti-abortion, and marrying Roos, a George W. Bush political appointee at the Department of Agriculture.

He bears some similarity in appearance to another Wisconsin Senator, Paul Ryan, and claimed to have voted “no preference” in the 2008 campaign.

His flip-flop on abortion will likely come back to become a topic in his run for Senate. He also once invited Rosie O’Donnell to talk about gun control, something that is already being used by both Democrats and Republicans as an example that he isn’t authentic.

He received an endorsement from Texas Senator Ted Cruz:

It means a lot to me to have the support of problem solvers like @tedcruz in my bid for #wisen. Please join us and over 8,000 Wisconsin voters as we work to #SendInTheMarine to take back Washington from career insider politicians. https://t.co/XSek4mwJSU pic.twitter.com/0mtvPyKyvw

He has also been reportedly endorsed by Trump’s former Chief Strategist, Steve Bannon. His parents, on the other hand, contribute to his Democratic opponent when he announced his bid for Senate.

See more about him in the video below: