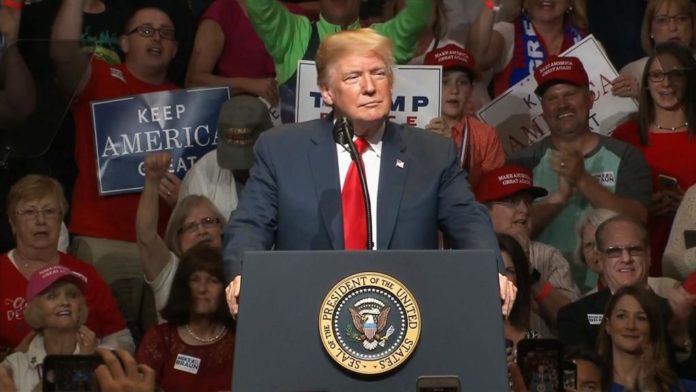 With the 2018 midterm election now less than 24 hours away, GOP House candidates across the country woke up Monday with a new poll showing them 13 points behind their Democratic rivals in the latest generic ballot, and many of those Republicans are now placing blame for their fading chances squarely upon President Donald Trump.

Politico reports that the general mood inside the GOP is one of fear and anger over how Trump has chosen to focus on himself instead of the party in the closing days of the 2018 race:

“Republicans focused on the [House] are profoundly worried that Trump’s obsession with all things immigration will exacerbate their losses. Many of these same Republicans welcomed Trump’s initial talk about the migrant caravan and border security two weeks ago, hoping it would gin up the GOP base in some at-risk, Republican-held districts.

“But they now fear Trump went overboard — and that it could cost them dearly in key suburban districts, from Illinois to Texas.”

“Trump has hijacked the election. This is not what we expected the final weeks of the election to focus on.”

Many GOP candidates would prefer if the president focused on the economy, but Trump himself glossed right over economic news at a campaign event in Florida over the weekend, remarking:

“We can talk about the economy, but the fact is, we know how well we’re doing with the economy and we have to solve problems.”

“Democrats are openly encouraging millions of illegal aliens to break our laws, violate our sovereignty, overrun our borders and destroy our nation. In so many ways. We can’t let it happen.”

Some Republicans have even gone so far as to publicly speak against Trump’s hardline approach to immigration. Rep. Carlos Curbelo (R-FL), who is locked in a reelection battle, responded to the president’s call to end birthright citizenship last week with a terse tweet:

“Birthright citizenship is protected by the Constitution, so no @realDonaldTrump you can’t end it by executive order.”

What many of these vulnerable Republicans are learning is something millions of us have known since Trump took office: He only cares about himself; everyone else is expendable. At a time when he should be out helping boost candidates from his party in the midterm, he’s chosen to engage in a warm-up for the reelection campaign he plans to run in 2020.