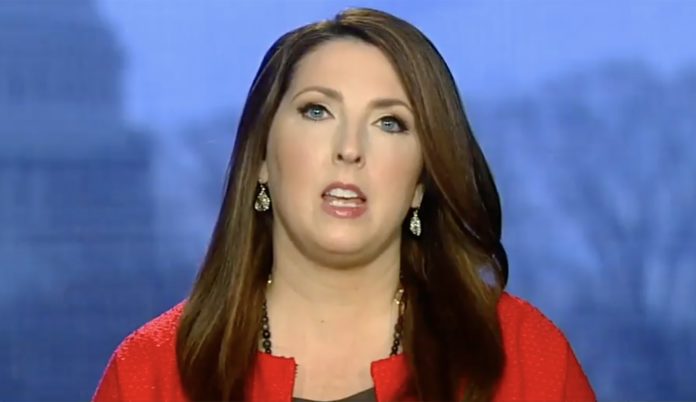 There appears to be disarray inside the Republican National Committee (RNC), with some members of the GOP accusing chairwoman Ronna Romney McDaniel of corruption regarding the process of choosing the party’s online donor platform, according to a new report from Politico:

The party chairwoman choked up as she kicked off a closed-door panel discussion on WinRed by addressing ongoing rumors that she and other RNC officials are poised to personally benefit from the new platform. At one point, McDaniel said the only money she is making is her RNC salary.

At issue is something called WinRed, which is online fundraising site that aims to complete with the Democratic-aligned ActBlue, which has raised millions from small donors to help support Democratic candidates across the country. And debate inside the party has touched off what can best be described as a burgeoning civil war:

Those close to McDaniel say she hadn’t initially planned on defending herself during the meeting, which was called to answer questions RNC members had about WinRed. But she and top aides to the president have grown aggrieved in recent days amid questions over who will profit from the new donor platform. At one point in the meeting, McDaniel referenced an anonymous email sent to reporters on Tuesday which called the RNC a “socialistic bully” and alleged an array of ethical problems with the platform.

Even more troubling for McDaniel is the fact that so far WinRed has been a miserable failure, bringing in a mere $184,000 since it was launched in June. In contrast, ActBlue raised a staggering $249 million during a six-month period in 2017.

Part of the tension inside the party is coming from GOP digital strategist Paul Dietzel, who runs a rival payment processing service known as Anedot. The RNC informed Dietzel that a new site he founded had to be shuttered immediately:

The RNC sent Dietzel a cease-and-desist letter about a new donation website he created earlier this month, and the committee has said it will withdraw funding for any campaign or organization that uses a non-WinRed platform — including Dietzel’s.

Dietzel has taken an aggressive posture, deriding the national party’s all-hands embrace of WinRed as tantamount to socialism.

All of this internal disarray comes at a very bad time for the RNC. In recent weeks, five GOP incumbent members of the House have decided not to run for reelection, setting up the chance that the party will lose even more seats in 2020.

The GOP is also facing the prospect of losing control of the Senate, which it controls by a margin of 53-47. However, more Republicans than Democrats are up for releection next year, and several are thought to be especially vulnerable.

And then there’s the matter of President Donald Trump, who has historically low poll numbers and could well be on the verge of impeachment.

But if the GOP wants to know who to blame for their current problems, they don’t have to look any further than the nearest mirror.