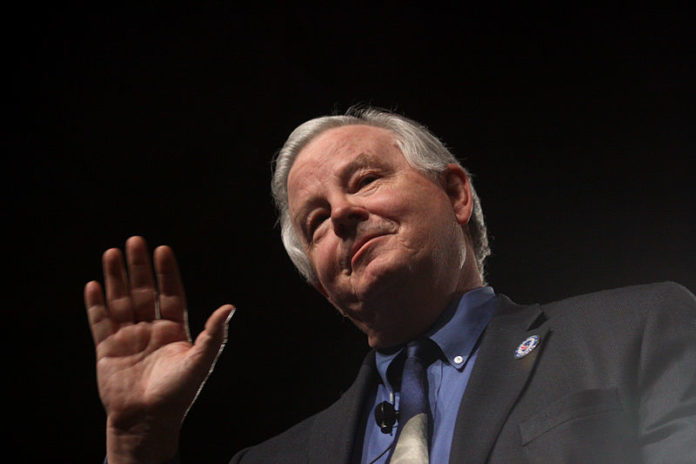 When Anthony Weiner got caught sending a d*ck pic to a woman he was forced to resign. Joe Barton should do the same.

Barton’s time as the longest-serving congressman from Texas could be over after nude pictures he sent to a woman made their way to the Internet this week.

The Republican congressman who apologized to oil giant BP after the government rightfully punished the corporation for the disastrous oil spill in the Gulf of Mexico off the Louisiana coast in 2010 is dealing with his very own sex scandal.

In the midst of a flood of detailed allegations of sexual assault and harassment against multiple politicians and Hollywood producers and actors, a selfie of a nude Barton with his d*ck hanging out hit the Internet and went viral, forcing him to make a statement.

Barton claimed that he took the picture while he was in an extramarital relationship with another woman while separated from his second wife. Apparently, he took the opportunity to sleep around during the break, leading one to wonder if he would call it his own personal Vietnam like Trump did when he admitted to sleeping around and somehow not getting an STD.

“While separated from my second wife, before the divorce, I had sexual relationships with other mature adult women,” he said. “Each was consensual. Those relationships have ended. I am sorry I did not use better judgment during those days. I am sorry that I let my constituents down.”

Frankly, it doesn’t matter if the women were adults or if each consented. The fact is that Barton sent a nude photo of his penis to a woman, which is the same thing former Democratic Rep. Anthony Weiner resigned for back in 2011.

But Barton went even further by threatening the woman he sent the image to with persecution by the Capitol Police, according to a recorded conversation obtained by the Washington Post.

“I want your word that this ends,” he said. “I will be completely straight with you. I am ready if I have to, I don’t want to, but I should take all this crap to the Capitol Hill Police and have them launch an investigation. And if I do that, that hurts me potentially big time.”

When the woman demanded to know what Barton would say, he continued making an even more significant ass of himself.

“I would tell them that I had a three-year undercover relationship with you over the Internet that was heavily sexual and that I had met you twice while married and had sex with you on two different occasions and that I exchanged inappropriate photographs and videos with you that I wouldn’t like to be seen made public, that you still apparently had all of those and were in position to use them in a way that would negatively affect my career. That’s the truth.”

And there you have it. Barton admitted to having sex with a woman he had only met twice while he was still married to his wife. That’s considered adultery in the state of Texas, despite his claim to have separated at the time. Then he threatened the woman to intimidate her from releasing the pictures he foolishly sent to her.

The fact that Barton took this photograph and sent it to someone should be enough to force him to resign. Sending nudes through social media or by phone is a risk no matter who does it. Barton certainly knew the risks. He was in Congress back in 2011 as the Anthony Weiner scandal unfolded.

Barton’s attempt to intimidate the woman with threats makes him even more of a creep.

The moral of this story is that if you are a politician, especially from a political party that claims to be the party of “family values” and “morality,” keep your junk in your pants and don’t take pictures of it.