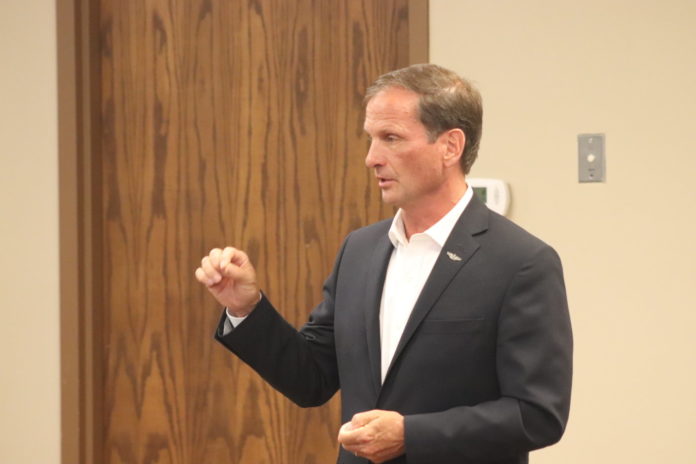 At a town hall meeting this week back in his home state of Utah, GOP Rep. Chris Stewart told constituents that he doesn’t believe President Donald Trump is a racist who is inspiring white supremacists to commit acts of domestic terrorism because the president hasn’t actually shot anyone himself.

According to The Salt Lake Tribune, about 80 people showed up for a town hall Stewart held in North Salt Lake City, and the congressman was immediately asked what he planned to do about keeping the public safe from mass shootings such as the ones that took place last week in El Paso, Texas, and Dayton, Ohio. Stewart replied that everyone should condemn violence and racism.

The response led one constituent to remind the congressman that he had voted against a House resolution that condemned Trump’s attacks on four Democratic congresswomen of color:

“Then why did you vote no to condemn racism?”

Stewart suggested the question contained the implication that he was also racist, leading him to remark:

“Why would I support a racist if I wasn’t?”

And when another attendee suggested that condemning racism and violence should include a president whose own racism is inspiring white supremacists to commit acts of terror, Stewart suggested that since Trump hasn’t actually pulled the trigger, his blatant racism is no big deal, commenting:

“The president of the United States, as far as I know, hasn’t shot anyone.”

That flippant response led a constituent to shout in response:

“Charles Manson never shot anybody either!”

Here’s audio of constituents confronting @RepChrisStewart at his town hall last night, including an exchange with a man who draws a comparison between @realDonaldTrump and Charles Manson #utpol pic.twitter.com/GhxFV6IMBt

As for any actual legislation he would support to prevent mass shootings, Stewart said he was open to passing passing so-called “red flag” laws that would disarm anyone deemed to be a threat to themselves or others, but rejected any added gun restrictions such as  banning assault weapons or expanded background checks.

Clearly, Congressman Stewart, like so many Republicans, is willing to support Donald Trump no matter what he does or says. That blind loyalty is one of the main things that’s destroying the GOP.