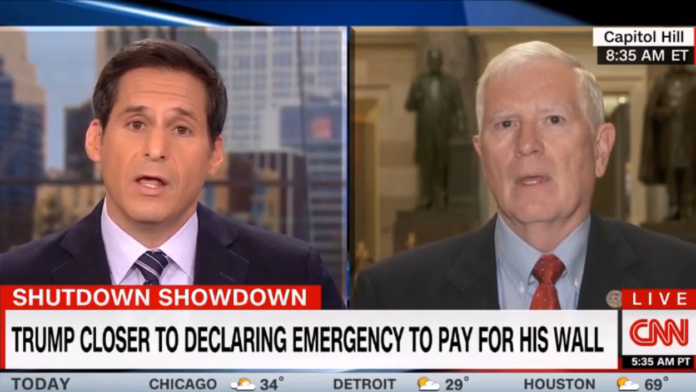 GOP Congressman Mo Brooks of Alabama got taken to school Friday morning by CNN host John Berman during a discussion of President Trump possibly declaring a national emergency in order to build his long-promised border wall.

Berman began the interview by asking Brooks why he had slammed President Obama in 2015 for using executive orders to make law but was now supporting Trump when he attempts to do the same:

“Well John, once again you guys at CNN are misleading the public.”

When Brooks began asserting that there’s a “national emergency of major proportions” at the border, Berman inquired:

The congressman turned to the usual Trump/Republican talking points on the border wall issue: Homicides committed by immigrants, drug smuggling, and Americans overdosing.

But when Berman dared counter with facts, telling Brooks that the vast majority of illegal drugs come into the United States via ports of entry and that migrants commit crimes at a lower rate than American citizens, Brooks became visibly agitated:

“How many dead people do you need to have John before you consider it an emergency!?”

That’s when Berman turned the tables on Brooks, asking a very fair question about how the congressman might feel if the roles were reversed:

“If the president can make the claim that national security money, emergency money is needed for a wall, could a president at one point say it’s needed to fight climate change?”

There was a long, uncomfortable pause before Brooks could finally respond:

“I would have to look at the specific statutes to see what you can and cannot do. This is so far out there…”

“Why? If it’s a matter of national security and the president deems it so, why is it outside the purview of the law?”

A defensive Brooks tried to regain his footing:

“I don’t see how that example that you gave affects the national security of the United States.”

But Berman was ready for that, too, telling Brooks:

“The Pentagon and the intelligence services often talk about the affects of climate change.”

Congressman Brooks, like many in his party, are delighted to let Donald Trump subvert the rule of law and Constitution as often as he wants. Their willingness to enable this would-be autocratic president is beyond despicable.