The United States Blues
Home Politics Congress GOP congressman hides in elevator when veterans try to question him on... 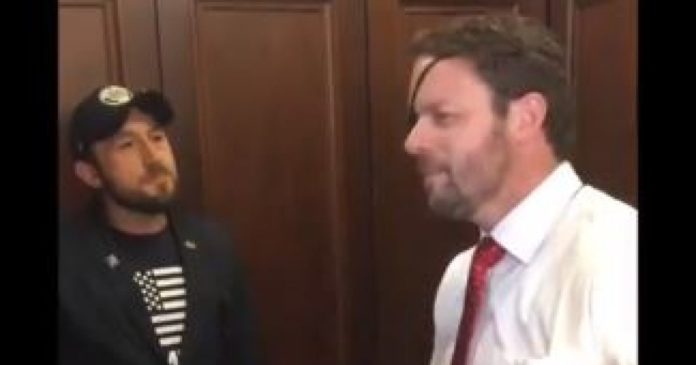 Texas Republican Dan Crenshaw was confronted by a group of combat veterans Thursday at the Capitol about why he isn’t holding President Donald Trump accountable for his many lawless actions. But rather than debate the vets, Crenshaw — a former Navy SEAL — tried to hide in an elevator.

The vets are with the group Common Defense, and in the video below, one of them asks Crenshaw:

“How can you let a criminal like Donald Trump run roughshod over our democracy and shred everything that you and I fought for? Like c’mon man. Like how can you just sit there idly by and not do your duty? We need your leadership right now. You cannot be complicit in this man’s crimes. It is immoral. It’s laid out clearly in the Mueller report.”

Instead of stopping to answer the question, Crenshaw whines:

“I know you’re going to make a video of this.”

But the veteran was far from done with the congressman, telling him:

“You are not stepping up to the plate. We need your leadership.”

Another of the Common Defense vets added:

“As a fellow wounded veteran, how could you let him take us into another war?”

In a dismissive tone, Crenshaw replied:

“What war is he taking us into?”

The first veteran then asked Crenshaw:

But the vet was having none of it, demanding:

“Are you kidding me? You need to get your courage back, c’mon.”

“Courage? You’re going to talk to me about courage?”

“Yes, we are talking to you about courage. As fellow combat veterans.”

As Crenshaw ducked in an elevator to escape the vets, the first protester noted:

“I fought in Iraq. He fought in Afghanistan. We need you, we are asking you for your leadership, we’re not trying to attack you. Read the Mueller report! There are ten impeachable obstruction offenses.”

Crenshaw never once explained his unwavering support for Trump.

GOP Rep @DanCrenshawTX hid in an elevator today when combat vets confronted him about his support for Donald Trump.

We’re standing up for our democracy and holding Trump’s cronies accountable. Join us: https://t.co/1pTmoYMH1d pic.twitter.com/5VKiPN8mpa