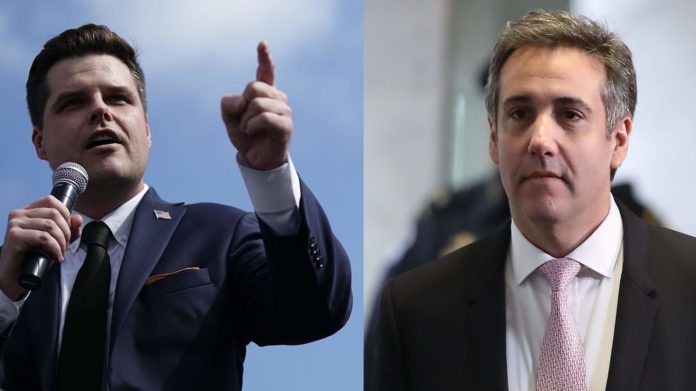 Hey @MichaelCohen212 – Do your wife & father-in-law know about your girlfriends? Maybe tonight would be a good time for that chat. I wonder if she’ll remain faithful when you’re in prison. She’s about to learn a lot…

Reaction to the Gaetz threat was immediate:

Trying to intimidate witness? Sweet! That charge will go nicely with your DUI’s

Are you freaken serious? Do you not understand that this is clear witness tampering? What are you so afraid of? Why are you trying to intimidate the man on the eve of his public testimony?

You sound scared Matt. That can only mean there is a chance we will learn some stuff tomorrow that you don’t want to come out. You particularly deserve everything that is coming. I hope they rain indictments down on trump, the gop and you. By the way do your girlfiends know?

Raging at a Federal witness 1 day before his Congressional testimony.

You probably shouldn’t gloat too much about who’s going to prison and who isn’t, Gaetz. Just sayin’.

Censure him, please @SpeakerPelosi this witness tampering in plain sight

Hey @mattgaetz you might want to contact a lawyer because what you did with this tweet is witness tampering 101- will you remain faithful in prison? https://t.co/nH0uk7ecPL .

If Matt Gaetz removed his head from Trump’s rectal cavity long enough to Google ”witness tampering” he probably wouldn’t have tweeted this.

I’ll be making a phone call to the Speical Counsel today. In legal parlance, this is called blackmail and obstruction of justice, @mattgaetz. Are you trying to go to prison? Who tweets our their crimes?