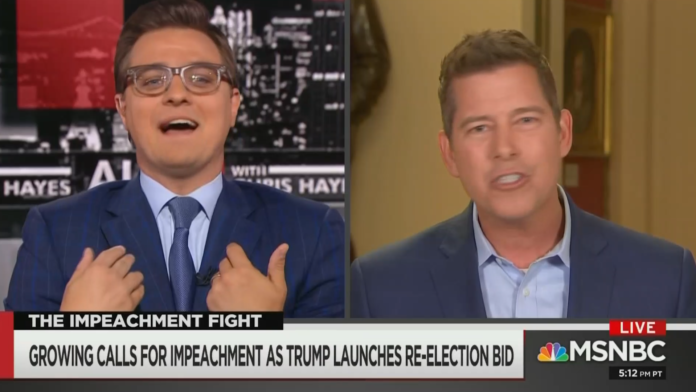 A Republican member of the House of Representatives said Tuesday evening on MSNBC that even if President Donald Trump did commit high crimes and misdemeanors, that’s not a problem because the economy is booming.

Rep. Sean Duffy (R-WI) was a guest on “All In With Chris Hayes,” and was asked by the host if he was comfortable with the many instances of obstruction of justice laid out in the Mueller report. Duffy replied:

“They have higher wages, lower unemployment. We’re killing it in Wisconsin. You want to impeach that guy?”

Hayes tried to redirect the Congressman back to the question he had posed:

“Congressman, just a simple yes or no. It is the fact you understand as a man who took an oath to the Constitution that the growth in the economy is wholly independent from whether a president committed high crimes and misdemeanors, correct?”

“There was a two-year investigation.”

Later in the interview, Hayes asked:

“Is there anything in the report in the conduct of the president that you just think is not cool, not good, not the kind of thing that you would advise or…”

That led Duffy to bring up — you guessed it — Hillary Clinton:

“What concerns me about the whole report is how this even began, Chris. The fact that you had the Democrat National Committee and Hillary Clinton started an investigation on Donald Trump that lasted for two years, and now whether it’s Justin Amash or Democrats who say we’re upset that Donald Trump attempted to obstruct the fake Russia investigation. There was no obstruction. Donald Trump gave them all kinds of information.”

Actually, Congressman, the DNC and Clinton did NOT start any investigation of Donald Trump. The FBI did because they suspected crimes were being committed. And there was plenty of obstruction. Robert Mueller laid out at least ten instances where President Trump tried to short-circuit or hamstring the Russia investigation.

The GOP has sold what was left of its soul to Donald Trump. They are now the party of Trump and they’ll do anything to protect him, no matter what crimes he may be guilty of.