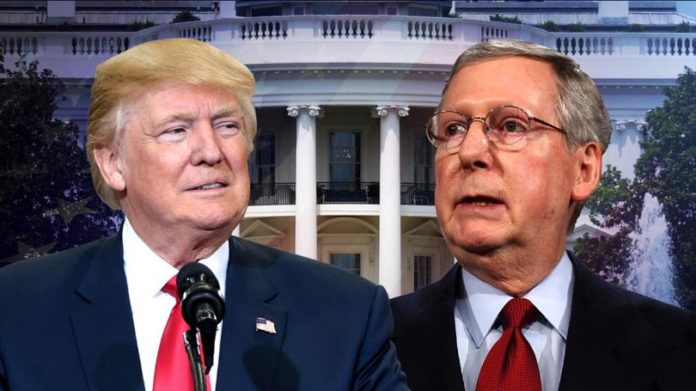 As the 2020 election draws closer by the day, some Republican insiders are warning that a a complete “wipeout” could be in the cards for Republicans, causing them to lose control of the White House and Senate and also remain as the minority in the House.

“House Republicans in swing districts are retiring at a very fast pace, especially in the suburbs of Texas and elsewhere. (Republicans talk grimly of the ‘Texodus.’) Rep. Greg Walden — the top Republican on the House Energy and Commerce Committee, and the only Republican in Oregon’s congressional delegation — yesterday shocked the party by becoming the 19th GOP House member to not seek re-election.

“President Trump trails every major Democratic candidate nationally and in swing states — and his favorable ratings remain well under 50%.”

Of particular concern to the GOP is their precarious hold on the Senate, where they currently have a six-seat majority:

National Journal’s Josh Kraushaar writes in his “Against the Grain” column that “the pathway for a narrow Democratic takeover of the upper chamber is looking clearer than ever”: “If Trump doesn’t win a second term, Democrats only need to net three seats to win back the majority.”

Scott Reed, a senior political strategist for the U.S. Chamber of Commerce, says that recent fundraising totals in three key Senate states — Arizona, Iowa, and Maine — are nothing short of a “three-alarm fire.” He added:

“The party was shaken by that. We’re all worried.

“We have to spend early because the climate stinks. All these incumbent senators have terrible job approvals and terrible favorables.”

Reed said he thinks Trump has a better than 50-50 chance of being reelected because “he’s still wildly popular in the middle of the country.”

But even if Trump does manage to win a second term and control of the House and Senate is in Democratic hands, he would find himself unable to accomplish any of his long-term goals, much the same way former President Obama was hindered by Republican control of Congress when he was reelected in 2012.