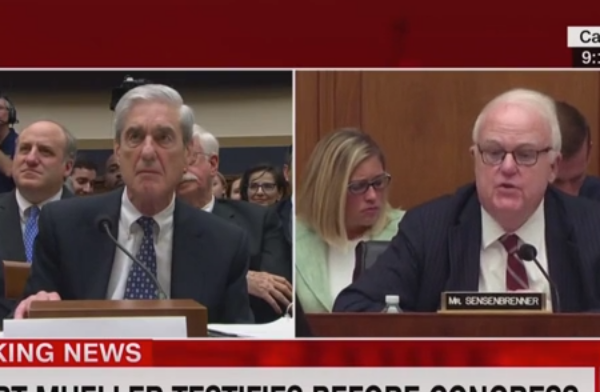 Mueller is testifying before the House Judiciary Committee about his final report, which does not exonerate Trump, because Democrats are trying to make a strong case to start impeachment proceedings, which Republicans are desperate to prevent.

But Sensenbrenner undermined his party’s efforts by trying to argue that there should not have been an investigation if there was no intent to indict Trump.

Mueller did not hesitate in his response.

The reason why Sensenbrenner’s question is a major score for Democrats is that he highlighted the fact that the Justice Department does not allow the president to be indicted, which means the only way for Trump to face the consequences of his crimes is for him to be impeached by Congress.

The Mueller report lists ten instances of Trump committing obstruction of justice to discredit or sabotage the investigation into Russian 2016 interference, crimes that are punishable with prison time.

Rep. Sensenbrenner’s question is answered in the report – even if President can’t be indicted, he can be investigated to “preserve evidence” because he can be charged later or impeached.

Sensenbrenner’s mistake comes just a day after the NAACP unanimously called upon House Democrats to impeach Trump. Now Republicans have given them even more cause to do so.