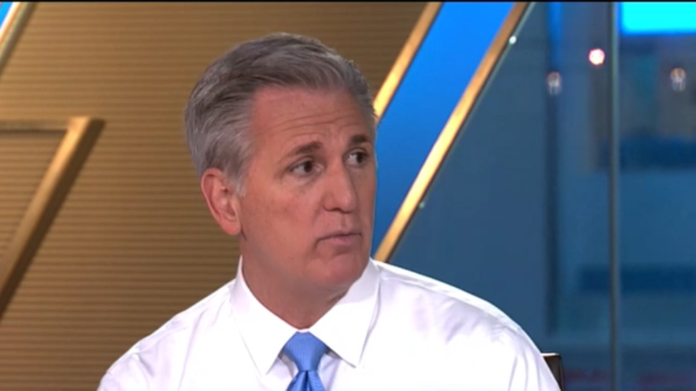 If perhaps you were wondering what finally convinced North Korean leader Kim Jong-un to sit down with President Trump and discuss nuclear weapons, GOP House Majority Leader Kevin McCarthy (R-CA) says it’s all thanks to the vulgar language Trump is so fond of using.

During an appearance on CNBC Monday morning, McCarthy was asked by host Andrew Ross Sorkin if was acceptable for the president to call NBC host Chuck Todd a “son of a bitch” during an unhinged speech Trump gave at a rally in Pennsylvania on Friday evening. Instead of replying directly, McCarthy answered with a question:

“Is President Trump any different than the candidate that he ran [as]?”

“That’s not the question.”

McCarthy went all around the block and back again with his response:

“So if you’re questioning did his character change, no, the American public knew this going in. Does that mean somebody has to agree with somebody 100 percent of the time? No. We’re separate but co-equal.”

Then McCarthy shifted to a bizarre defense of the foul mouth on Trump by claiming it had brought the North Koreans to the negotiating table:

“This man is no different from what he ran as and that’s what the American people voted for. You’re going to pick that part off but are you going to spend any time when you criticized him for dealing with North Korea differently? And what’s the outcome? How many lives is that going to save?”

Not content, McCarthy doubled down on his ludicrous assertion:

“But I definitely don’t want my children to see any missiles coming from North Korea. And I’m going to give him a lot of credit for that. And maybe his personality was a little different, but I’ve watched those personalities in the past that said all the right things and North Korea is still developing a weapon.”

It’s incredible (and disgusting) to watch as Republicans continually try to defend, normalize, and prop up Donald Trump, no matter what he says or does. There doing to be a reckoning one day for their complicity, and it may well come in November at the ballot box.