The United States Blues
Home Politics Congress GOP preparing to give the richest families in America yet another massive... 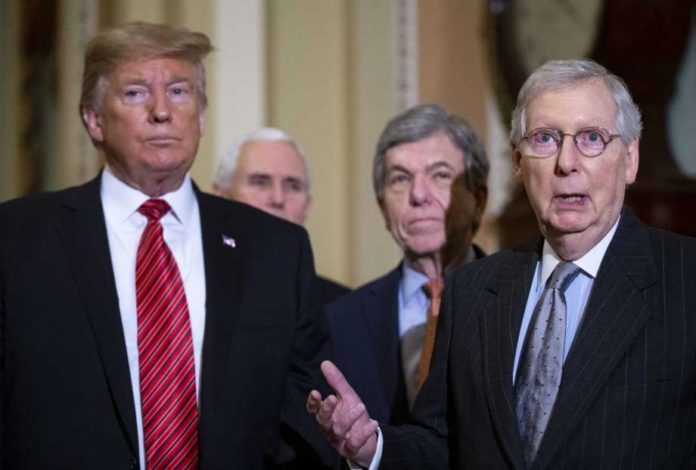 A year ago, Congressional Republicans finally realized dream of giving a massive $1.5 trillion tax cut to richest Americans and corporations, promising that the measure would pay for itself and give a giant boost to the U.S. economy.

Now, however, the economy appears to be on the verge of a recession and the Treasury Department announced Tuesday that it will have to borrow an additional $1 trillion to pay for the GOP tax scam plan.

And yet, Senate Republicans are now eyeing an attempt to eliminate the estate tax, handing another tax giveaway to the richest families in the country.

Who would benefit most from a repeal of the estate tax? Families such as the Waltons, the owners of Walmart, and the Koch brothers.

The Tax Policy Center notes that only 1,700 of the wealthiest families in the United States currently pay the estate tax. And that, according to Morris Pearl, chair of the Patriotic Millionaires, is an abomination:

“Who in the world could look at this country and think that giving more money to the heirs of multi-million dollar fortunes is our most urgent and pressing need? The estate tax affects less than 2,000 families each year, and even with the tax, those heirs are able to inherit over $22 million completely tax free,” Morris Pearl, chair of the Patriotic Millionaires. Meanwhile, nearly 100 million Americans live in or near poverty, and 40 percent of working Americans make less than $15 an hour.

“This legislation is insulting to those millions of Americans who are struggling, it is harmful to the fabric of our democracy, and it is blatantly bad policy that is intended only to please ultra-wealthy Republican donors.”

Frank Clemente, executive director of Americans for Tax Fairness, said the proposed estate tax repeal proves that Republicans are the party of greed:

“Greed has no limit for the GOP. We need to reverse direction—not allow the GOP to hand the rich even more tax cuts.”

It also appears that the tax issue is beginning to work against the GOP. Not long after Rep.  Alexandria Ocasio-Cortez (D-NY) proposed raising the top marginal tax rate to 70 percent for the richest Americans, a poll conducted by The Hill and HarrisX showed that 59 percent of the public supports such a hike in the top rate for taxpayers.

Meanwhile, Republicans look for new ways to let the filthy rich keep as much of their money as possible.