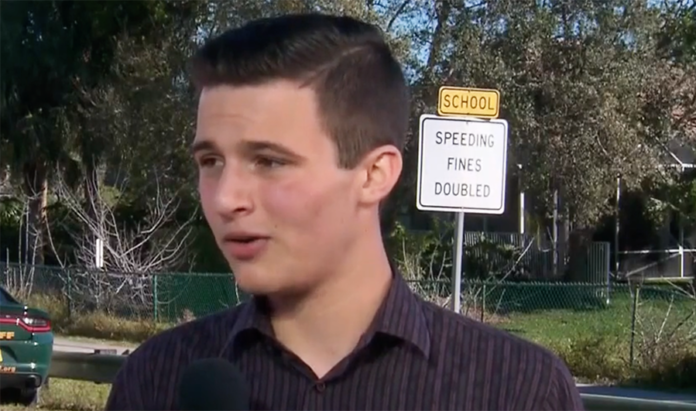 The students who survived the mass shooting at Marjory Stoneman Douglas High School in Parkland, Florida have not been shy about attacking politicians whose inaction made the murders of 17 fellow students and teachers possible. GOP leaders have been busy blaming mental illness for the shooting rather than owning up to their allegiance to the interests of the NRA as a result of campaign contributions.

One student, Cameron Kasky, had a statement that was particularly striking.

During an interview with Anderson Cooper on Friday, Kasky told the host that he’s done with the GOP’s “thoughts and prayers”:

“Everything I’ve heard where we can’t do anything and it’s out of our hands and its inevitable, I think that’s a facade that the GOP is putting up. After every shooting, the NRA sends a memo saying ‘send your thoughts and prayers’. This is the only country where this kind of thing happens. I’ve heard from other people, they don’t have gun drills. We had to prepare extensively at Stoneman Douglas. This is something that can be stopped and will be stopped.”

As if Kasky’s statement wasn’t powerful enough, he echoed the actions of his fellow classmates by directly calling out the GOP’s hypocrisy:

“There is a segment of this society that will shrug this off and send their thoughts and prayers but march for hours over a rainbow wedding cake.”

You heard it right: a high school student just pinpointed exactly what’s wrong with politics in the United States today. The GOP cares more about keeping wedding cakes out of the hands of same-sex couples than they do about the lives of American students (and all Americans who aren’t rich, for that matter).

Something extraordinary has happened in America this week. The media has begun to listen to the country’s youth. Provided a platform, these young voices have shown grown adults across the nation that it’s time to change, now or never.

GOP beware: one day, all of America’s students will be old enough to vote.