The United States Blues
Home Politics Congress GOP Rep. Matt Gaetz has his microphone shut off when he starts... 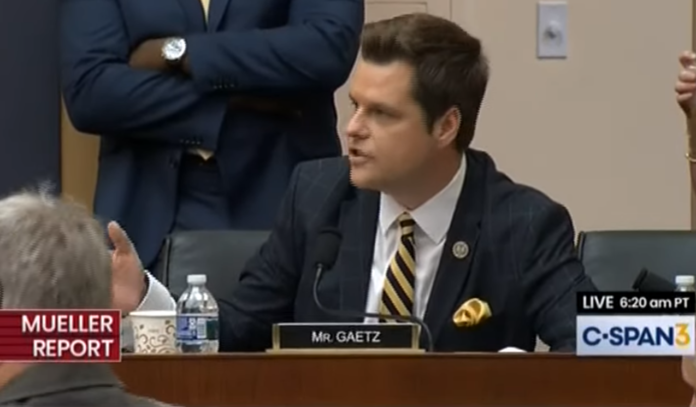 Rep. Matt Gaetz (R-FL) has long been one of President Donald Trump’s most fervent (and at times deranged) supporters in Congress, but his efforts to defend Attorney General William Barr — who refused to show up and testify before the House Judiciary Committee Thursday morning — were short-circuited when the chairman of the committee had Gaetz’s microphone cut off in the middle of his rambling.

Barr refused to show up for the hearing because committee Democrats had planned to allow committee attorneys to question the attorney general instead of individual lawmakers.

When the hearing was called into session, Republicans on the committee immediately began complaining that Chairman Jerry Nadler had been unreasonable and was responsible for Barr not appearing. Nadler responded by reminding them:

“We will make sure that no president becomes a monarch. We need the information without delay. The hearing is adjourned.”

And that’s when Gaetz began his outburst by demanding he be recognized by the chairman:

When he got no response from Nadler, Gaetz continued:

“If it’s going to be, Mr. Chairman, that there is not going to be a recognition of members who seek legitimate inquiry as to the procedures –”

And that’s when Nadler had Gaetz’s microphone cut off, which he has every right to do since he controls the committee. It’s the same exact thing Republicans did for two years when they had a majority in the House.

Now that Barr has refused to testify before the judiciary committee, it appears that Nadler will have no choice but to issue a subpoena for his appearance. If Barr continues to refuse, he could be held in contempt of congress, which he may or may not care about.

But the larger question is why exactly Barr is so afraid of letting attorneys ask him any questions. Does he fear that a good lawyer can trip him up and get him to admit that he’s actively engaged in obstructing justice on behalf of President Trump?