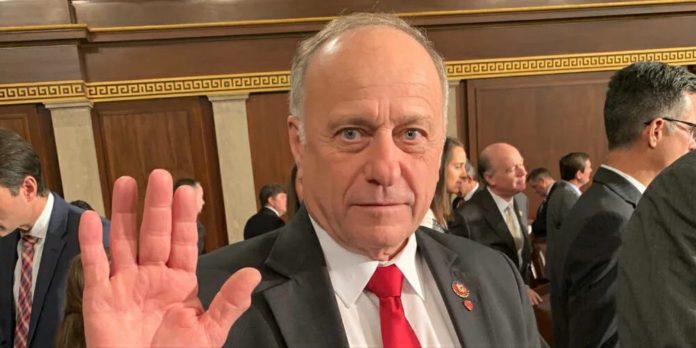 According to Iowa Republican Congressman Steve King, black disaster victims are lazy and that’s why FEMA doesn’t really want to help them recover from things like hurricanes.

King was speaking at a town hall meeting in Charter Oak, Iowa, this week when the subject of the recent floods in the state came up. King couldn’t resist comparing Iowans to the flooding victims of Hurricane Katrina, which devastated New Orleans in 2005.

According to King — who has also claimed he doesn’t see why it’s bad to be called a white supremacist — he witnessed what Hurricane Katrina did first-hand:

Iowans, on the other hand, King continued, are eager to help each other:

“They’re just always gratified when they come and see Iowans take care of each other, so that’s a point of pride that spreads across the country.”

Keep in mind that King represents a district that’s 95 percent white. The city of New Orleans was 67 percent African-American when Katrina hit 14 years ago.

My heart goes out to all Iowans. Though it unsettles me that @SteveKingIA would dare compare them to the countless victims of Katrina, many of whom lost their lives. When people show you who they are, believe them. Steve King is a white supremacist and I won’t stand for it.

“These comments are disgusting and disheartening. When communities are affected by disasters, we come together to help each other, not tear each other down.”

Of course, King specializes in being disgusting, speculating that white society would be superior to one composed of blacks and meeting with known white nationalists while visiting Europe. His own party is so sick and tired of his moronic behavior that they took away all of his committee assignments recently when he refused to apologize for his racist pronouncements.

The greatest disaster of all is that King is still in Congress. He needs to be retired by voters and put out to pasture.