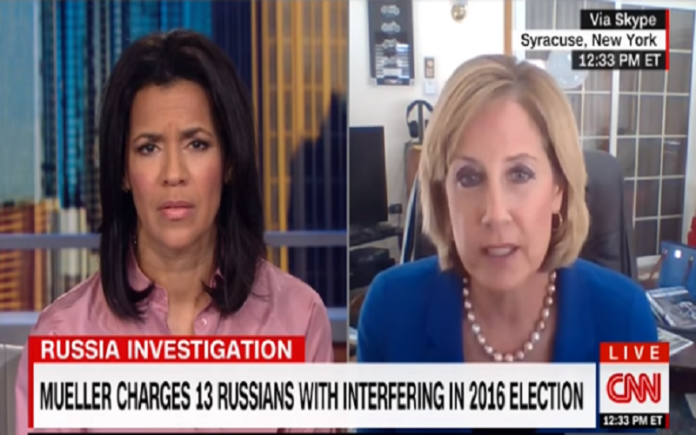 Despite overwhelming evidence pointing to Russian interference in the 2016 Presidential Election, President Trump and his cronies have repeatedly called it a “hoax” and the now infamous “fake news.” In fact, Trump somehow managed to make yesterday’s bombshell news of Special Prosecutor Robert Mueller issuing indictments against 13 Russia nationals for criminal conspiracy all about himself.  Worse yet, he expressed little concern that a hostile foreign power had been trying for nearly four years to disrupt  American democracy, much less any commitment to stopping it from continuing to happen.

Well, it seems some Republicans are taking a page out of Trump’s book of treason and trashing the Mueller indictments.

During an appearance on CNN’s Newsroom with Fredricka Whitfield, Republican Congresswoman Claudia Tenney (R-NY) had the audacity to smear Mueller’s Russia indictments. Sickeningly enough, she played petty partisan politics with one of the biggest scandals in history.

“I think it’s unfortunate that Democrats are overeracting to this as far as focusing on Trump and Russia collusion,” said Tenney

Whitfield, seemingly aghast at Tenney’s lack of concern, proceeded to press her on how alarming the details that came out of the indictments were. Tenney proceeded to dodge the question and, more frightening, continued to downplay the biggest breach in American history:

“Why aren’t Democrats working together with Republicans to stop this instead of trying to create, what looks like an unending smear campaign?”

Actually, Democrats and Republicans overwhelmingly voted to impose the toughest of sanctions on Russia. It was President Trump who chose not to implement them, thus creating even more suspicion of collusion. Tenney lost any shred of credibility when she said she hasn’t even read Mueller’s indictments.

For a woman who openly admitted she hasn’t read the entirety of the indictments, it’s painfully obvious she is totally incapable of weighing in on the issue.

Watch the entire segment below: