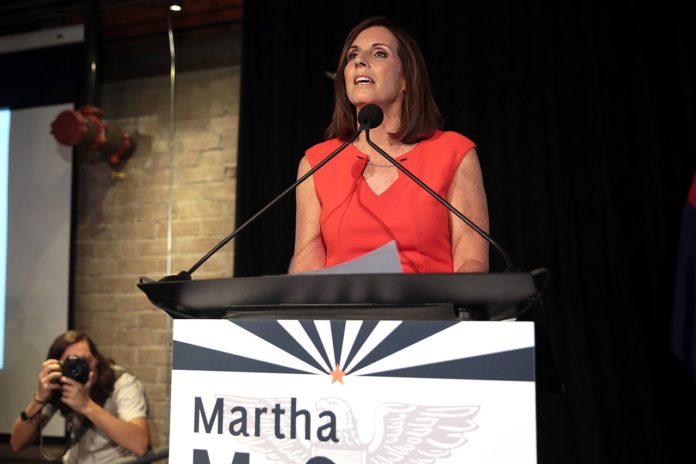 Rep. Martha McSally (R-Ariz.) is currently locked in a tight Senate race with Democratic opponent Kyrsten Sinema. And one of the reasons why is McSally’s vote to repeal the Affordable Care Act, and now she’s whining about it.

Sinema has frequently led in the polls throughout the race. If she wins, it would flip a red seat to Democrats in November and would be considered an upset and a rejection of Republicans.

One of the issues that are important to Arizona voters this year is whether or not they will have healthcare in the future, especially people with pre-existing conditions.

You see, Obamacare, also known as the Affordable Care Act, extended insurance coverage to millions of Americans with pre-existing conditions that they had been discriminated against for in the past.

McSally, however, has repeatedly voted to repeal the landmark legislation, and recently voted for the American Health Care Act, which would have kicked 23 million Americans off of their insurance.

As a result of that on-the-record vote, Arizona voters are throwing their support to Sinema, and McSally threw a temper tantrum about it during an interview with Fox News propagandist Sean Hannity this week.

“Well, Sean, I did vote to repeal and replace Obamacare on that House bill — I’m getting my ass kicked for it right now,” she admitted before blaming Democrats. “It’s being misconstrued by the Democrats. They’re trying to, you know, invoke fear in people who have family members or loved ones with pre-existing conditions.”

That’s a Trumpian lie that demonstrates how unfit McSally is, and how desperate she is to win.

Now she insists that she supports protecting people with pre-existing conditions.

“Before the Affordable Care Act, we know many, many people could not get health insurance because they had some sort of condition like diabetes, asthma, heart disease,” she told AZ Central. “Someone very close to me filed for bankruptcy over medical bills because of this issue. I voted to protect people with pre-existing conditions.”

No, she didn’t. She voted to repeal the very law that actually does protect Americans with pre-existing conditions. And she is repeating the same lie that Trump is repeating because Republicans realize that Democrats are beating them up with their obsession to kill healthcare.

Pretending that she didn’t vote to take healthcare away from people with pre-existing conditions disqualifies McSally from the Senate. The seat she is running for just happened to belong to the late Senator John McCain, who in the wake of his own brain cancer diagnosis voted against Republican efforts to repeal Obamacare and signaled his refusal to vote for the American Health Care Act bill that McSally supported. That should tell Arizona voters everything they need to know about McSally. She can’t be trusted to protect their health.

It should also be pointed out that McSally refused to weigh in on Texas v. Azar, a lawsuit against the Affordable Care Act that could gut it even more than Republicans already have. And let’s not forget that McSally voted for the GOP tax cut bill that ended the individual mandate, which had required all Americans to buy health insurance so that coverage would be less expensive. Now premiums are on the rise, especially for those with pre-existing conditions.

Republicans are so scared of losing power that they are resorting to lying about what they believe in order to get votes. But the record clearly shows that Republicans like McSally voted to gut pre-existing conditions protections, and they should pay the price for it.