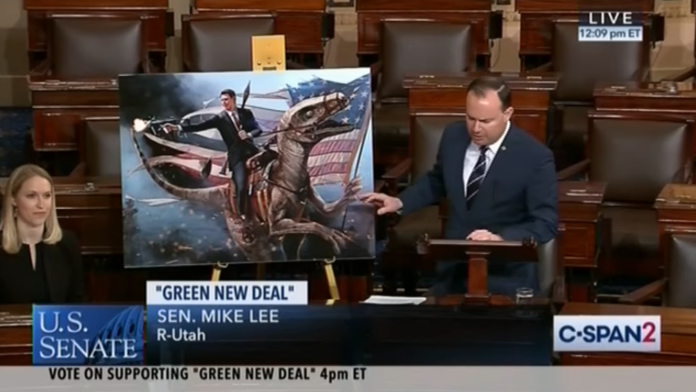 During a Senate debate on the Green New Deal Tuesday, Senator Mike Lee (R-UT) decided to use visual aids, but the one he chose left a lot of people scratching their heads in confusion.

As he was speaking on the floor of the Senate, Lee suddenly unveiled an enlarged photo of the late President Ronald Reagan in a desperate attempt to suggest that the fight against climate change is as phony as Reagan defeating the Soviet army with his own army of dinosaurs:

“This is of course a picture of former President Ronald Reagan, firing a machine gun while riding on the back of a dinosaur. Critics might quibble with this depiction of the climactic battle of the Cold War, because while awesome, in real life there was no climactic battle… The Cold War, as we all know, was won without firing a shot. But that quibble actually serves our purposes here today, Mr. President, because this image has as much to do with overcoming communism in the 20th century as the Green New Deal has to do with overcoming climate change in the 21st.”

What in the living hell?! How is the Cold War even remotely analogous to climate change? The comparison is so ridiculous that it’s enough to give you a massive migraine headache. Reagan on a dinosaur is the same as not having clean air and water?! In what bizarro universe is that the case?

Before he was finished, Lee also showed photos of Luke Skywalker from “Star Wars” on the planet Hoth and Aquaman riding a giant seahorse.

It’s tempting to dismiss Lee as just another right-wing idiot who is trying to get some free publicity, but the sad fact is that Fox News will probably be running the video every hour on the hour later today and gullible Trump-supporting viewers will likely be doing Google searches to find out where they can purchase those giant photos of Reagan on a velociraptor.

If this is the best argument Republicans have against climate change, then those of us who support scientific fact and evidence have already won the debate.