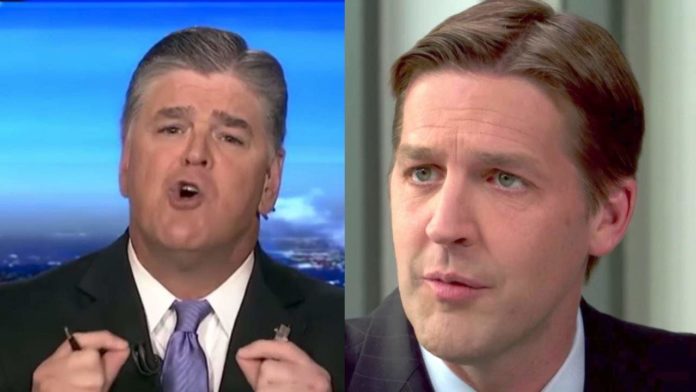 There are few people on television who are more fully enchanted with President Donald Trump than Fox News host Sean Hannity, who seems to have a bizarre man crush on Trump that only gets stronger by the day.

But according to Nebraska Senator Ben Sasse (R) Hannity is a pox on the United States and a great danger to American democracy.

Sasse was a guest Sunday on CNN’s “State of the Union” to discuss his new book, The Vanishing American Adult. In a section of the book, Sasse is critical of the way cable news programs tend to cater to political extremism. That led host Jake Tapper to ask the senator:

“You have harsh words in the book for partisans on both sides, including Fox News host Sean Hannity. That his goal is not to offer coherent arguments against liberal principles but instead, quote, ‘His core cause is to rage.’

“Hannity responded on Twitter saying after your book fails ‘I will gladly debate you about how the success of the last two years would never have happened with your never-Trumper positions and also we could talk about why I know you are a con artist and phony.'”

“I told Sean I would be happy to debate him in a neutral environment about whether or not his business model is good for America because it’s bad for America and we need to back up.”

However, the Nebraska senator also asserted that Hannity and MSNBC host Rachel Maddow have a lot in common:

“Hannity is number one and Rachel Maddow is number two. They both have the same basic business model; try to intensify the political addictions of the 1 percent of America that’s listening to you and you can always demonize your opponent, never give what the other argument is.

“The business model that people like Hannity advance isn’t good for the next generation because it doesn’t get to any sense of what a shared republic is doing together.”

What Senator Sasse failed to note, however, is that Rachel Maddow deals in facts, not bogus conspiracy theories like Hannity. And Maddow has never been afraid to call out Democrats when they say or do things that are harmful to the country. Hannity, on the other hand, doesn’t give a damn what happens to the U.S. as long as his ratings — and his salary — increase.