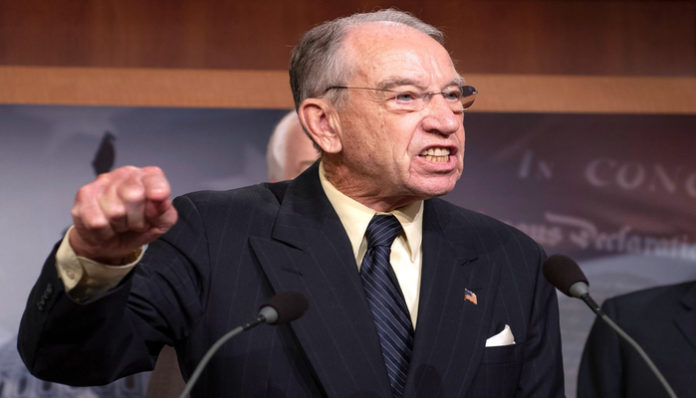 Senator Chuck Grassley (R-IA) is angry with a nonpartisan agency for daring to expose the dark secret at the heart of the 2017 GOP tax scam bill: That it only helped large corporations and the richest Americans, while giving everyone else the economic shaft.

In a letter he sent on Friday to Mary B. Mazanec, director of the Congressional Research Service (CRS), Grassley wrote:

“I have received comments from others who believe that the CRS observations are not entirely nonpartisan in tone or objective.

“CRS ought not to present its analysis as objective, nonpartisan, and authoritative.”

Translation: Grassley is upset that the CRS didn’t agree to lie for him and other Republicans who promised the tax cut would be good for middle-class taxpayers, most of whom saw their refunds drastically cut or eliminated when they filed their taxes for the 2018 tax year. Many taxpayers wound up owing the IRS money due to the new tax law, and that has the GOP nervous as the 2020 election approaches next year.

What Grassley neglected to mention is that the CRS is indeed nonpartisan, as the Library of Congress notes:

“CRS is well-known for analysis that is authoritative, confidential, objective and nonpartisan.”

Grassley is agitated because the CRS analysis of the so-called “Tax Cuts and Jobs Act” concludes this about the legislation:

So corporations saw their taxes cut in half, while the rest of us who aren’t rich had ours cut by four-tenths of a percent. Wow, no wonder we didn’t all go out and buy expensive new luxury cars with our massive “tax cut,” huh?

As for the other GOP promise about their tax scam — that it would stimulate the U.S. economy — it turns out that was nothing but a load of bull, too, CRS reports:

“It’s difficult to overstate just how weak the tax law’s influence was. Investments in US businesses did not seem to respond at all to the law’s provisions.”

It shouldn’t surprise anyone that Chuck Grassley is angry because most of us got the shaft thanks to his tax scam law. After all, he’s the same person who whined in February that it was “stupid” for taxpayers to complain that their refunds had been reduced.

Clearly, when it comes to the definition of stupid, Chuck Grassley and his fellow Republicans just cannot help but prove how ignorant they are of even the most basic laws of economics.