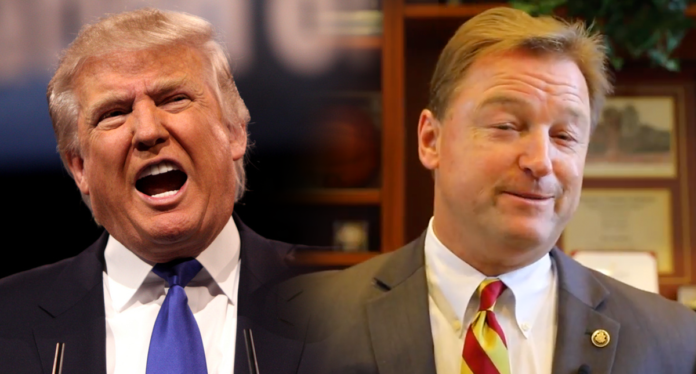 Sen. Dean Heller (R-Nevada) is considered “the most vulnerable Republican up for re-election in 2018,” as the only incumbent Republican up for re-election representing a state won by Hillary Clinton in the 2016 presidential election. In his vulnerability, he has apparently grasped at a straw, suggesting that Supreme Court Justice, Anthony Kennedy will retire in the summer, but that remains to be seen, and there is some evidence that’s just wishful thinking for Heller.

A vacancy in the SCOTUS was a motivating factor for Republicans to vote in the 2016 presidential election, and Heller, knowing his future in the Senate looks grim, is looking for any way he can get voters to turn out for him in November. Including totally fabricating – that Justice Anthony Kennedy would retire this coming summer.

While in Las Vegas last week, Heller predicted that:

“Kennedy is going to retire around sometime early summer. Which I’m hoping will get our base a little motivated because right now they’re not very motivated. But I think a new Supreme Court justice will get them motivated.”

“Mike Lee from Utah is probably on that short list of the next Supreme Court justice in our courts.”

So sorry, Heller, but a political writer, Matthew Chapman, shared some evidence to the contrary on the prospects of Kennedy’s early retirement:

So, who wants to break it to @DeanHeller that Justice Kennedy has already hired a round of law clerks for another term? #EpicFail https://t.co/7BbNQ22OEN

Regardless of what Justice Kennedy ends up doing, Heller knows his chances are slight for winning his bid for re-election.

We don’t know about that, but CNN did name Heller’s race in Nevada as one of the “10 Senate seats most likely to flip in 2018.”

Other than offering conjecture about the SCOTUS, Heller has to perform a dance that many Republicans are learning all too well today.

“Heller can’t afford to lose conservatives by breaking with Trump, yet must keep a lane to the center open to win a general election. It’s the trickiest political equation facing any GOP senator on the ballot this year.”

Not only is he facing stiff competition from Democrat Rep. Jacky Rosen, but he’s also facing competition from Republican challenger Danny Tarkanian in the primary on June 12. Tarkanian led Heller by 8 points in a poll from JMC Analytics in August 2017.

Tarkanian has boxed Heller in, suggesting he’s not pro-Trump enough.

The businessman has seized on the audio from POLITICO himself and called out Heller for saying he thinks the Mueller investigation should continue.

In another Tweet, Tarkanian says he believes Heller has thrown Trump “under the bus.”

Meanwhile, Catherine Cortez-Masto (D-Nev.), who defeated former Rep. Joe Heck (R-Nev.) in 2016, is saying Heller appears to be embracing Trump, who proved to help her drag down Heck. Cortez-Masto said:

Heller “is going to have make that calculation for himself. But I know from what I’ve seen, he’s embraced President Trump.”

Sen. Dean Heller will have to walk an awkward fine line, but one area where he does clearly embrace Trump is in his appointment of conservative judges to stack the courts, including Justice Neil Gorsuch.

He released a new video on March 2, proudly saying:

“I want to update you on my fight to put more conservative judges on the federal bench.”

If Trump has proven toxic to voters in Nevada, maybe Republicans in the area will overlook him and focus on the prospects of lifetime appointments in America’s court system?

The prospect of that should send chills down the spines of all Democrats, and will hopefully motivate them to turn out and vote.

Featured image Via YouTube And By Gage Skidmore via Flickr/CC-By-SA-2.0.