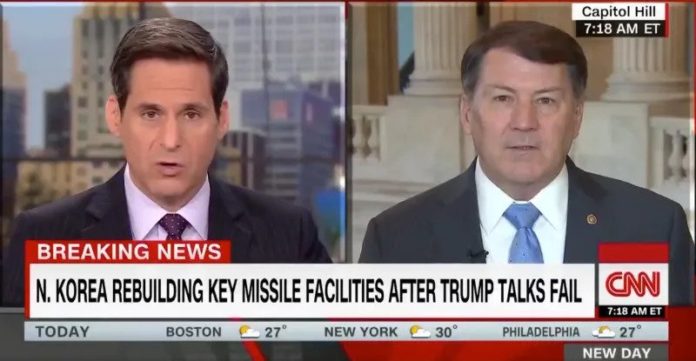 The latest instance of Republican “family values” in the Age of Trump comes to us from GOP Senator Mike Rounds (SD), who wants us to know that President Donald Trump is a truly fine man who only pays off women he has extramarital affairs with as a sign of just how much he loves his family.

“Most of us have a concern anytime you have a president who is trying to work through some very personal matters.”

Is that right? In that case, perhaps Senator Rounds can enlighten us with why his party went after former President Bill Clinton when he attempted to work through some “personal matters” that eventually led to his impeachment.

But Rounds was far from finished, also asserting that Trump’s payoffs prove just how much he loves his family, though one wonders if Melania Trump would agree with such a notion:

“There are people who have testified that part of those payoffs, though, were to influence the election. You do know that that is something that the Southern District of New York has alleged.”

Proving his own pathetic cowardice and blatant hypocrisy, Rounds could only respond:

“I’m not going to try to litigate that today.”

It’s safe to say that if Barack Obama had paid off women he had affairs with, Senator Rounds and his Republican colleagues would have been ready to impeach Obama and nail him to the nearest cross. Yet they stand by and blithely defend Trump as if he’s a child who shoplifted a pack of gum from the corner store.

Memo to Senator Rounds: Donald Trump doesn’t love anyone but himself. If you haven’t figured that out by now, then the voters of South Dakota need to replace you with someone who has a functioning brain.