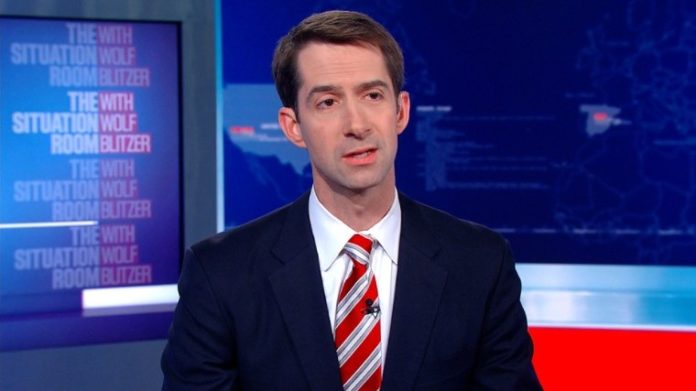 In what could well be a hint that the Trump administration is indeed making plans for military action against Iran, Senator Tom Cotton (R-AR) said Tuesday that even if a war between the U.S. and Iran were to become a reality, it would be over with in “two strikes” from the United States.

During an appearance on “Firing Line,” Cotton was asked by host Margaret Hoover:

“Could we win a war with Iran?”

“That didn’t take you a second.”

“Two strikes: the first strike and a last strike.”

Senator Cotton was quick to add that he wasn’t advocating for a war with Iran:

“I don’t advocate military action against Iran. I’m simply delivering the message that if Iran were to attack the United States, it would be a grave miscalculation on their part and there would be a furious response.”

Senator @TomCottonAR tells Firing Line if it comes to war with Iran, he is confident the United States would win, and would win swiftly. “Two strikes, the first strike and the last strike,” says the Senator. pic.twitter.com/twTdrFTwHu

Senator Tim Kaine (D-VA), whose son is serves in the military, made it clear that he doesn’t agree with Cotton, writing on Twitter:

Remember Iraq? A President told America that we had to go into war because Iraq had nuclear weapons.

Now look at Iran: We had a diplomatic deal that was working. President Trump broke the deal, and now he’s saying we could wage war against them?

This is the height of idiocy.

Trump thinks our troops are toy soldiers he can just move around—but these are real men and women whose lives are at stake. Many are in my state. I’ve got a kid in the military. And I will do anything I can to stop this President from getting us into a war we should not be in.

As The Hill notes, Trump seems bound and determined to provoke a military confrontation with Iran:

The already contentious relationship further deteriorated last week after the Trump administration announced a U.S. carrier strike group would head to the region in response to unspecified “troubling and escalatory indications and warnings.”

The move was reportedly prompted in part by intelligence that Tehran gave permission to some of its proxy forces to attack U.S. military assets and personnel in the region.

The real reason for the heated rhetoric against Iran may be an attempt to distract us all from the endless scandals growing around the president, who is desperate to change the topic with Special Counsel Robert Mueller preparing to testify before Congress within the next couple of weeks.

Ask yourself this question: Do you doubt that a man as craven and utterly deranged as Donald Trump would hesitate for a second to start a military confrontation in order to save his own skin? And that question prompts yet another one: Isn’t it time this madman was removed from office?