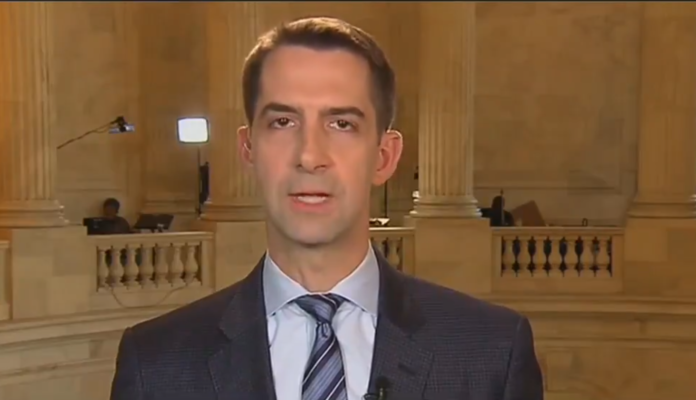 During an appearance on Fox News, Senator Tom Cotton (R-AZ) openly advocated for President Donald Trump to send troops across the southern border into Mexico as a way of combating violence by drug cartels in the country.

Cotton was addressing the recent horrific killing of at least nine Americans, including six children, in what has been described by media reports as a “highway ambush.”

Here’s what Cotton had to say:

“This is the depraved massacre of three women and six children. Cartel violence in Mexico has reached an all-time high over the last year, murders have surged under President López Obrador’s policy of ‘hugs not bullets.’ I mean, that may be nice for a children’s fairy tale, but in the real world when the bad guys and cartels have .50 Caliber Machine Guns, the only answer is more bullets and bigger bullets. And if Mexico can’t protect American citizens in Mexico, then we may have to take matters into our own hands.”

That wasn’t all Cotton said on the matter. He doubled down on the threat of invasion, adding:

“Look, our special operations forces were able to take down al-Baghdadi in Syria a couple of weeks ago. They did it to Osama bin Laden in Pakistan eight years ago. I have every confidence that if the president directed them to do so, they could impose a world of hurt on these cartels a few dozen miles away from the American border.”

What Senator Cotton conveniently neglected to mention is that sending the U.S. military into Mexico would be an invasion of another country. It could also result in Mexican drug gangs coming across the U.S.-Mexico border to seek retribution by gunning down innocent American civilians in the streets.

As much as Cotton and others in the GOP would love to change the subject from the impeachment of the president, the very last thing this country needs is to get involved in yet another war.

Did Tom Cotton … did he just threaten to invade Mexico? pic.twitter.com/qjpmljQiOU

Tom Cotton is back on Fox News and he is dead serious about invading Mexico pic.twitter.com/c47m6Jaq2x