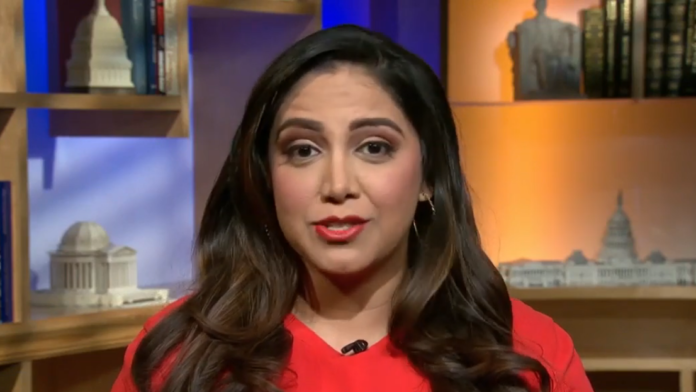 A GOP political consultant made a somewhat contradictory (and incredibly revealing) remark about President Donald Trump during a discussion of his declaring a national emergency so he can steal money from the federal budget to build his wall on the U.S.-Mexico border.

Rina Shah served as an adviser to Evan McMullin, a Republican who ran against Trump in 2016, and she told MSNBC host Kendis Gibson that Trump is a “Teflon president” and his base supporters will never disown him, no matter what he says or does, or how often he lies.

When the discussion turned to the chances of Trump being re-elected in 2020, Shah predicted the path Trump will take as he seeks to win a second term in office:

“I think Trump is a man of his word in many ways and I think this wall issue — he doesn’t want to let it go away. He’s going to lie, pull out all the stops. I don’t think he cares about the numbers or governing. I think he cares about being well-liked and this is a simple fact now.”

Did you catch that? Trump is a man of his word who will lie and pull out all the stops. In other words, the ends justify the means, no matter how bad the results from what he does. As we’ve repeatedly seen during Trump’s first two years in office, he will repeatedly cater to his supporters no matter how horrific his words and actions must be. He wants to be adored by his fans, and nothing else matters. In Donald Trump’s self-absorbed world, he is the center of the universe.

Later in the discussion, Shah added:

“He’s going to really focus on his re-election. If it means lying, abandoning people like Ann Coulter and embracing those who embrace him like [Sean] Hannity, he’s going to do whatever it takes. The power of the incumbency is with him. Any challenger who comes at him right now is just dead in the water already.”

But Shah is wrong. A challenger can indeed defeat Trump in a landslide if that candidate appeals to the hope and optimism of the American people instead of the anger and darkness offered by Donald Trump.

Trump’s wall is all about him, and that alone suggests that he’s doomed to fail.