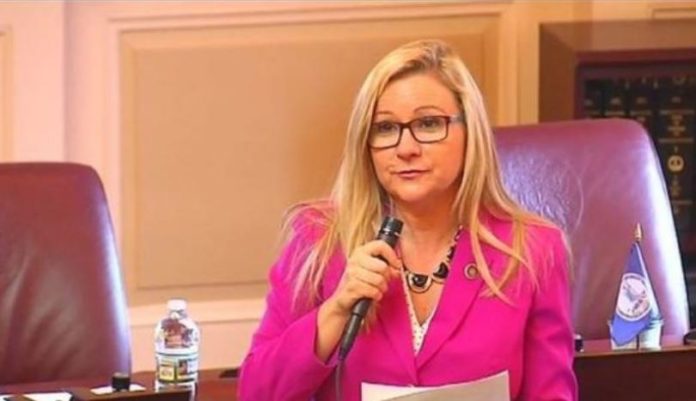 Virginia state Senator Amanda Chase thought it’d be a good idea to prove her pro-Second Amendment credentials with a petition she posted on social media which she encouraged her supporters to sign in order to protect the right to own a firearm.

In her posting, Chase made sure to note:

“I’m not afraid to shoot down gun groups.”

Heads up gun groups. Amanda Chase is not afraid to shoot you down. 📸: Traci Franssen pic.twitter.com/wYOvTrmJWp

A few days earlier, Chase had begged the National Rifle Association to send her money to use in her 2018 reelection campaign, remarking:

As Share Blue Media notes, the reference to a $200,000 check that the NRA gladly bestowed on one of Chase’s GOP colleagues in the state legislature:

Chase is referring to a September $200,000 campaign check the NRA wrote to state Del. Todd Gilbert, the Republican majority leader in the Virginia House of Delegates. The check came weeks after Gilbert, Chase, and the rest of the Republicans in the Virginia legislature abruptly ended a special session meant to address gun violence.

The special legislative session was called by Virginia’s governor following a late May mass shooting in Virginia Beach that left a dozen people dead. Rather than take any action, Chase voted with her Republican colleagues to adjourn the session after a mere 90 minutes.

Chase wants to win an election so badly that she’s willing to actively court donations from the gun lobby and then declare that she’ll “shoot down” those who disagree with her stand on the Second Amendment. Clearly, she fits right in with the Republican Party.

Amanda Pohl, Chase’s Democratic challenge, made her own online posting in response to Chase:

“This kind of rhetoric and threats towards those you disagree with from my opponent is disturbing. I’m ready to listen to everyone in our community and work for real solutions to the challenges we face.”

Chase has a history of bad behavior. Earlier this year, she verbally assaulted a police officer who refused to let her park in a reserved spot, accusing capitol police of being “Democratic operatives.”