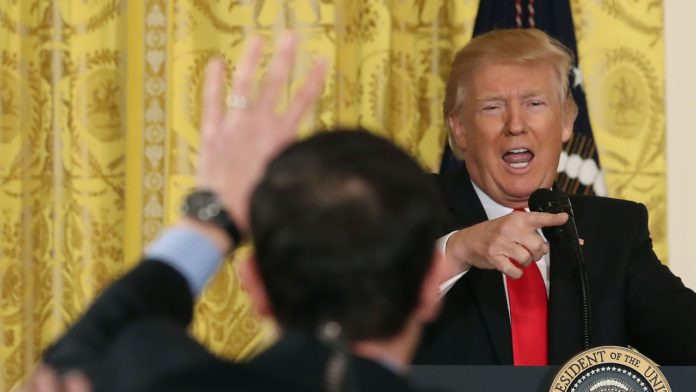 The Republican National Committee (RNC), aligned with the pro-Trump super PAC America First, are planning to use a campaign of intimidation to attack reporters who are critical of President Donald Trump, according to The Atlantic:

“‘Any reporter who tries that will be hit with 30-second spots of all their ridiculous claims about collusion … Their tweets have all been screencapped. It’s all ready to go.’ (‘It’s the same thing we’ve been doing the last two years. We’re going to hold the media accountable when we see fit,’ an RNC official clarified, adding that this would include digital clips shared on social media.)”

The Trump campaign kept a collection of reporters’ tweets in 2016 too, which officials occasionally mentioned https://t.co/1bCes8ioKw

The White House is said to be nervous that new revelations from the report compiled by Special Counsel Robert Mueller may be politically damaging to the president, despite Trump’s insistence this week that he’s been fully exonerated by Mueller. In reality, as Attorney General William Barr noted, while the Mueller report didn’t find enough evidence to charge the president with a conspiracy and obstruction of justice, it also did not fully exonerate him, either.

Some of the president’s congressional allies are warning that repeated attacks on the media would be counterproductive, with Rep. Mark Meadows (R-NC) noting:

“Calling on the media to apologize is not something that most people would advocate for, as much as hitting the remote and changing to a different channel.”

But as we’ve learned repeatedly since Donald Trump first announced his run for office, the president almost never takes sound advice from anyone, even those who are in his own party.

As ThinkProgress notes, attacking the press has long been a tactic of Trump’s, even though doing so only serves to set up a more adversarial relationship that winds up being counterproductive to the administration:

“At campaign rallies, Trump frequently lashes out at journalists who report what he deems ‘fake news.’ During the 2016 campaign, Trump’s own campaign manager was arrested after physically assaulting a reporter, and charged with battery. His supporters have been known to directly confront reporters in attendance, sometimes physically.”

And now we have the apparatus of the RNC serving as a co-conspirator as Trump prepares to lash out at anyone who dares to criticize him or report on his words and actions. We truly have entered a pseudo-fascist era in this country’s history, and seeking to squelch the First Amendment rights of the press will now come from multiple directions, meaning more danger for reporters as Republicans prepare their own plan to create a chilling effect on the press.

If you were wondering when exactly the United States would be on the cusp of totalitarianism, the RNC, America First, and their patron, Donald Trump have just made it clear that day has arrived.