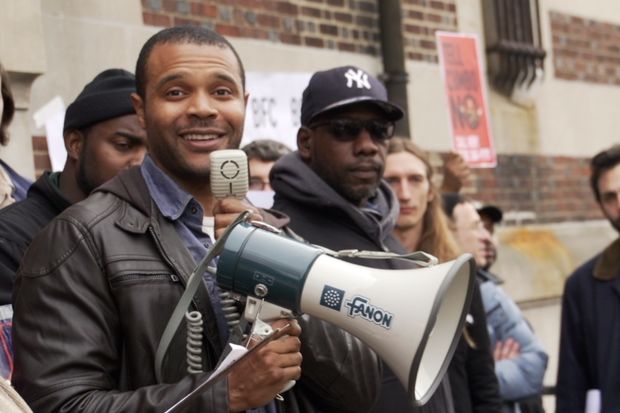 In the era of Trump, progressive politics are taking hold in cities across America at an unprecedented rate

A new Green Party candidate is putting up a grassroots fight in Central Brooklyn’s District 35 to win a seat on the Brooklyn City Council, City Limits reports.

Jabari Brisport is a self-proclaimed Democratic Socialist. He’s 29 years old, an actor, a tutor, and a native of Prospect Heights. He’s not messing around.

“Take down the signs immediately,” he warned volunteers after a rally in Brooklyn’s McNair Park. “We get $75 fine for each.” A few minutes later, the wind whipped one of the two bright-green campaign signs from a lamppost, and Brisport went running after it.

Brisport is the self-proclaimed “crazy Green Party dude.” He won the primary with 32 votes to his opponent’s four. Last week, he was arrested and escorted from a City Planning Commission meeting in Lower Manhattan for shouting down the commission’s approval of a controversial development plan for the Bedford-Union Armory in Crown Heights.

The development, led by BFC Partners, will create a mix of both “affordable” and “market-rate” apartments, as well as luxury condos and a recreation center. Only 18 of the 330 apartments will be set aside for families that make $31,000 a year or less.

“I would not vote for a project, at all, unequivocally, with market rate, luxury condominiums,” said Councilwoman Laurie Cumbo in June. Brisport argues that it’s not enough – the project should be killed entirely to make way for 100% affordable housing.

He was arrested again on Thursday, marching against the armory plan near City Hall. “Stop arresting me for protesting gentrification,” he tweeted.

Now that’s the kind of dedication we need from our politicians!

“The mayor is the one trying to hammer this armory deal through and he’s, like, convinced it’s a referendum on his housing policy. It’s absolutely crap. It’s going to push a lot of people out of the district just as his housing policies have been accelerating gentrification.” – Jabari Brisport

Last month, Our Revolution, the “next step for Bernie Sanders’ movement,” endorsed Bridgeport. They keep a running list of candidates to pay attention to, which you can check out here.

Since August, the Democratic Socialists of America have provided Brisport with hundreds of volunteers. With DSA’s help, he collected the signatures to get on the Socialist ballot line, which has gained popularity since Trump took office. He’s also raised just short of $150,000 without any donations from developers.

Brisport has a tight race ahead of him. He knows that establishment politics are stacked against him. He is not giving up.

“It’s about waking people up and getting them engaged in the politics. Tons of the people I’ve spoken to don’t know there’s an election coming up, don’t know that there’s a City Council or how it even works.” – Brisport

As we saw in the Birmingham, Alabama mayoral race, progressive candidates can and will pull through. If you live in Brooklyn, get out and vote!